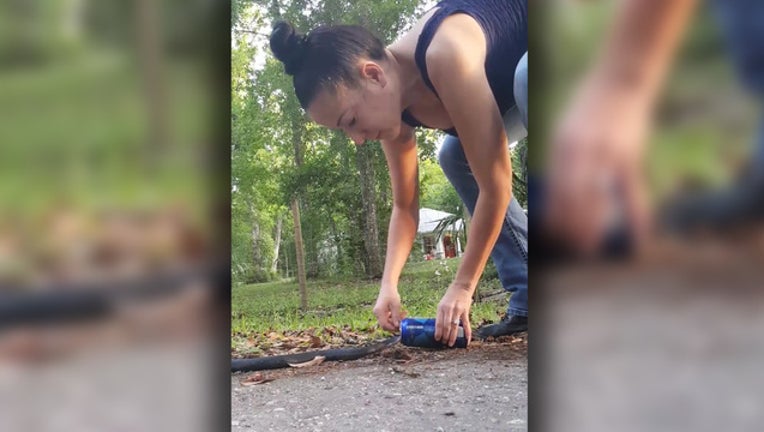 BROOKSVILLE, Fla. (FOX 13) - This is one unusual animal rescue!

Rosa Fond was driving in Brooksville on Thursday evening when she spotted a snake with its head stuck in a beer can on the side of the road.

Fond, who owns Humans and Animals United rescue, said she jumped out of her car and knew she had to save the snake -- even though she may not be a fan of the slithery creatures.

"[I] saw she was alive and started to panic but I knew I had to save her," Fond told FOX 13. "Anyone else would have probably killed her... I couldn't let her be hurt."

Fond started recording on her cell phone and grabbed a stick in an attempt to free the black racer snake from the can, all while her two dogs stood by and watched.

"I gotta save a snake! Oh God, I don't know how I'm going to do this!" Fond could be heard saying nervously in the video.

As she prodded at the reptile with the stick, the snake flinched, prompting Fond to reply, "Please don't bite me when you get out."

It took several minutes, but she ultimately was able to free the snake's head from the can.

"How on earth did I get the courage to do this I have no idea! She even wrapped herself on my arm twice!" Fond wrote. "It was a battle but I saved her. All for the sake of the animals."

Fond pointed out that she eventually picked up the can from the road but had to wait until the snake "calmed down."