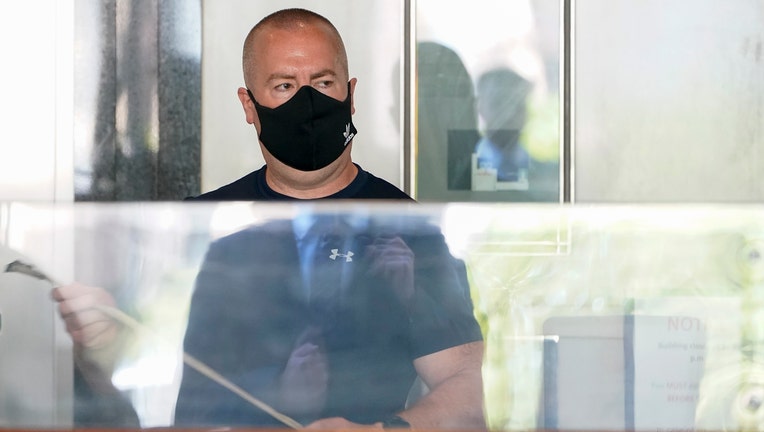 James Theodore Highhouse goes through security as he arrives for his sentencing hearing at U.S. District Court in Oakland, Calif., Wednesday, Aug. 31, 2022. Highhouse pleaded guilty to sexually abusing an inmate while working as a prison chaplain at (Associated Press)

DUBLIN, Calif. - Former prison chaplain, James Theodore Highhouse, is the first of five correctional officers at FCI Dublin to be sentenced Wednesday after all were charged with having sex with incarcerated women. A judge sentenced him to seven years behind bars, calling his crimes "unspeakable."

In witness statements, women described Highhouse dry humping them, offering his chaplain office as a sex den and telling them Bible stories to manipulate them into having sex.

Many of the women told U.S. District Court Judge Haywood S. Gilliam Jr. that Highhouse took advantage of them at their lowest points; and two said they would never return to church again.

While Highhouse, 50, was charged only with abusing one inmate, prosecutors say he engaged in predatory conduct with at least six women from 2014 to 2019.

Highhouse pleaded guilty in February, asking for leniency. He noted that he served as an Army chaplain in Iraq and Afghanistan and is seeking treatment for post-traumatic stress disorder and major depressive disorder.

In court, Highhhouse apologized and his lawyers said he suffered from "impulse control."

Detailed below are the stories of the women he abused.

The information is a combination of what federal prosecutors wrote in sentencing documents and what the women wrote the judge themselves: 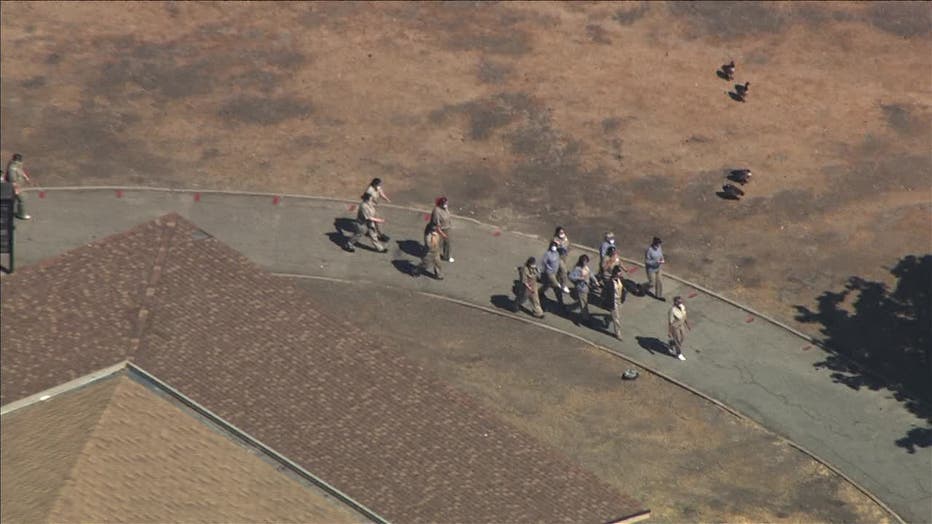 Aerial shot of the all-women's prison in Dublin, Calif.

While incarcerated at FCI-Dublin, identified in court records as L.I., sought out the advice of the prison chaplain, having learned early in life that, "you can always trust a chaplain."

She confided in him about her past, including that she had been sexually assaulted and suffered trauma as a result. Highhouse told her that while he could not help her psychologically, he could help her spiritually.

He talked to her about his "dissatisfaction with his marriage to coerce her, he also exploited his service in the Army, and then ultimately, L.I.’s relationship with God to manipulate her," prosecutors wrote.

Initially, L.I. started working as an orderly at the chapel, and Highhouse saw her regularly in his office.

He started having unwanted physical contact with her in May 2018.

First, he hugged her, then grabbed her buttocks and rubbed his crotch against her so that she could feel his penis, prosecutors wrote.

Once, when she was getting supplies from a closet, he grabbed her, pushed her into a wall and began  "dry-humping" her.

He told L.I. that he couldn't control himself.

He added he was sad because he hadn't had oral sex in a long time. Didn't she want to make him happy?

"He further justified his requests by telling her that everyone in the Bible has sex," prosecutors wrote.

He told her that God had brought them together and he guilted her into making it seem like she owed him for all that he had done for her.

He quote the Bible. He referenced King David's many wives as justification.

She finally gave in.

Highhouse then made L.I. give him oral sex every week for two months.

On occasion, he digitally penetrated her vagina, telling her that he wanted to "loosen her up."

Eventually, the two had intercourse.

Semen found in her underwear proved revealed that it most likely belonged to Highhouse, prosecutors wrote.

L.I. considered reporting the chaplain many times, but he warned her that if she ever told "no one will believe you because you’re an inmate, and I’m a chaplain."

Moreover, he told her that even if she did report him, he would end up with a mere slap on the wrist, just like every other employee at FCI Dublin who engages in similar behavior.

He also played on her sense of Christian forgiveness, telling her that if she reported him, he would lose his job and his family.

L.I. did not want to be responsible for that, and to this day, feels that same sense of guilt.

Highhouse's conduct only came to light because in February 2019, L.I. told another corrections officer that a chapel staff member had been taking advantage of her, and that she had been doing things of which she was ashamed.

According to that officer’s report, L.I. "inadvertently mentioned being raped."

That officer referred the matter to the prison’s security investigative services.

As a result, L.I went to the hospital for a sexual assault nurse examiner’s and the federal investigation was launched.

The FBI and the Office of the Inspector General investigators interviewed Highhouse for two hours in February 2019. Highhouse generally denied the allegations, calling L.I. a "manipulative liar."

None of his denials were true, prosecutors said.

L.I., has since returned to Thailand, she realized her depression is not a sign of weaknewss or sin.

She wrote the judge that she is hoping that with God's help she can "break through the clouds of isolation and stigma" so that the "burden of shame" can be lifted.

She also said that while she cannot condone what Highhouse did to her, she does forgive him.

Dublin prison guard says she was forced out for reporting abuse

Tess Korth worked as a federal correctional officer at Dublin's prison for 25 years, in which she reported the abuse of women. Then, she got a letter telling her she was re-assigned to a male facility in Oregon. She left. And now, she's telling her side of the story.

Highhouse had sex with victim in chaplain office

Most recently, in May 2022, three months after Highhouse entered his guilty plea in this case, W.P., a woman now incarcerated in a BOP facility out-of-state, came to federal officials.

She told them that when she was housed at FCI-Dublin, in late 2017 through early 2018, Highhouse had sex with her several times his chapel office on multiple occasions.

W.P. initially came to Highhouse because she "seeking peace about ow to deal with her sentence."

At first, W.P. attended his classes, where he spoke of dating, women hurting him, and how he could not find love anywhere.

Feeling like she could relate to him, W.P. saw him for one-on-one counseling sessions, particularly when she was distraught.

W.P. described a pattern of behavior similar to what L.I. described, to include Highhouse complaining about his wife in an effort to gain her trust and sympathy.

W.P. explained that she welcomed the hugging, touching, and companionship because she was so lonely.

W.P. did not view these acts as "rape," explaining that she been raped in prison before, where she was thrown to the ground, and this was different.

W.P. explained that the intercourse was "more Highhouse's thing," and she just wanted love and comfort.

In April 2018, W.P. asked to transfer to another facility, calling FCI Dublin too "wild."

She tried to report what Highhouse had been doing, but an officer just shrugged her off.

In her impact statement to the judge, W.P. wrote that she feels "dirty."

"I was at the lowest point in my life," she wrote. "And I was looking for hope and comfort. Highhouse turned that around for his own benefit."

She said she will never return to the church.

Chaplain claims to be sex therapist

While Highhouse was abusing W.P,  a woman identified as T.M. in court records, reported his vile language in February 2018 to a corrections counselor.

Highhouse wanted to know about her sex life in the prison. He also claimed to be a sex therapist and offered up his office as a place for T.M., and another woman, N.J., to have sex.

N.J. later describe that Highhouse would leer at her after she took a shower and watch her through the windows.

Despite the report, investigators did not initiate an inquiry, prosecutors wrote.

T.M. wrote the judge that she doesn't even go to church anymore because of Highhouse and she doesn't really trust anyone anymore.

"I believe that he should be held accountable for what he did and go to prison," T.I. wrote. "What he did was not fair and destroyed lives so now his life should be destroyed too."

Another woman, D.A., said that Highhouse called her into his office in January 2019 for  counseling session.

D.A. said she tried to avoid Highhouse after that point.

In 2015, while Highhouse was working as a chaplain for the VA Hospital in Palo Alto, he met with a female patient, identified as S.G., who was there receiving treatment for PTSD she suffered after being raped while serving in the Army.

While counseling her, Highhouse seemed "overly interested" in the details of that rape, and asked for physical details of her physical relationship with her husband.

He even offered her ways to "spice up" her relationship.

She thought he seemed "creepy," especially after she walked in on him with his pants down and his penis out.

He told his assistant that he had simply spilled water on his pants and had been wiping it off.

The assistant reported his behavior to the chief chaplain, but nothing happened.