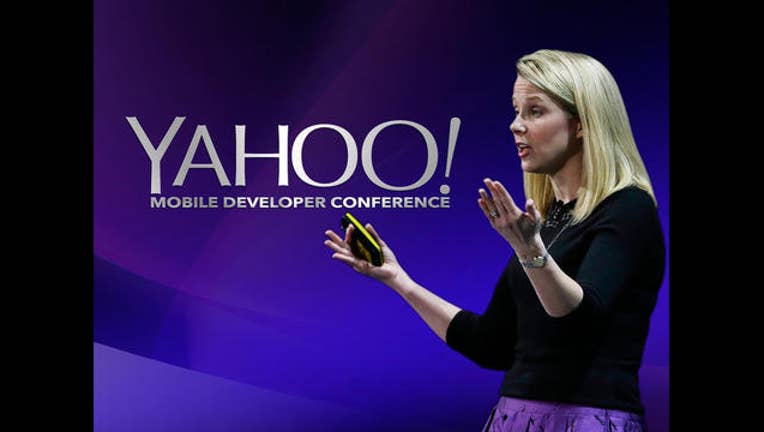 SAN FRANCISCO (AP) — Yahoo CEO Marissa Mayer will walk away with a $55 million severance package if the company's auction of its Internet operations culminates in a sale that ousts her from her job.

The payout disclosed in a regulatory filing Friday consists of cash, stock awards and other benefits that Mayer would get should she be forced out as CEO within a year after a sale.

Although Yahoo's board is still evaluating takeover offers, most investors are betting that the company will decide to sell its well-known brand and an Internet business that includes a popular email service and sections focused on sports and finance.

Mayer, a former Google executive, has been unsuccessfully trying to turn around Yahoo for nearly four years. Instead, Yahoo's long-running slump has deepened during her reign, making her pay a prickly topic among investors.

"I don't think this management team has done anything to merit a huge payout," said Eric Jackson, managing director of SpringOwl Asset Management, a Yahoo shareholder critical of Mayer's leadership.

Yahoo declined to comment beyond its filing with the Securities and Exchange Commission. The documents didn't explain the rationale for the severance packages covering Mayer and other Yahoo executives, although they are common at most publicly held companies as a way to maintain some stability during times of uncertainty.

Mayer received a compensation package valued at nearly $36 million last year under the SEC's accounting rules. Yahoo's board maintained in its filing that it was only worth about $14 million as of April 1.

The chances of a sale happening at Yahoo Inc. increased earlier this week when the Sunnyvale, California, company reached a truce with activist investor Starboard Value, an outspoken critic of Mayer's that has been pushing her to sell. Starboard CEO Jeffrey Smith is now one of three Yahoo directors on a special committee assessing the bids for the Internet business.

Although Yahoo's hasn't set a timetable for reaching a decision, most analysts expect a deal to be struck within the next two months at a price ranging anywhere from $4 billion to $10 billion.

In an opinion shared by most of his peers on Wall Street, RBC Capital Markets analyst Mark Mahaney says he believes Verizon Communications is the most likely buyer. After snapping up AOL Inc., another fallen Internet start, for $4.4 billion, Verizon has publicly expressed interest in taking over Yahoo, too.

That has spurred speculation that AOL CEO Tim Armstrong will shove aside Mayer if Verizon buys Yahoo's Internet operations. Armstrong was a top advertising executive at Google during much of the same time Mayer was working on some of the products that helped turn Google into the Internet's most powerful company.

Mayer's inability to boost Yahoo's advertising sales at a time that marketers are shifting more of their budgets to digital services is the main reason investors are pushing the company to cash out and turn its Internet operations to a new owner.

Last year, for instance, Yahoo's board set a target asking management to generate $4.6 billion in revenue, after subtracting ad commissions. That would have been a modest 5 percent increase from the previous year. Yahoo's revenue last year instead came in at $4.1 billion.

The company this year expects its revenue after ad commissions to decline another 15 percent to a projected $3.5 billion.

Mayer is nearly done with a cost-cutting plan that is jettisoning 15 percent of Yahoo's workforce in an effort to boost profits as revenue drops.

Yahoo's stock added a penny to close Friday at $36.60, more than double its value in July 2012 when the company hired Mayer. But the run-up has been driven by the rising value of Yahoo's stake in China's e-commerce leader, Alibaba Group.

The investment in Alibaba was made long before Mayer's hiring, although she has been unsuccessfully trying to find a legal way to avoid paying taxes when the stake is sold.