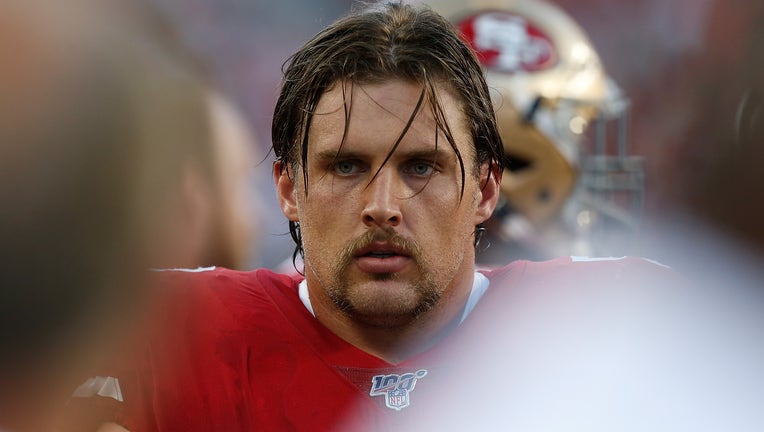 SANTA CLARA, CALIFORNIA - OCTOBER 07: Weston Richburg #58 of the San Francisco 49ers looks on from the sideline in the first half against the Cleveland Browns at Levi's Stadium on October 07, 2019 in Santa Clara, California. (Photo by Lachlan Cunning

The 29-year-old Richburg officially announced his retirement Wednesday. He missed the entire 2020 season recovering from knee surgery and remained on San Francisco's roster until now to delay some of the salary cap impact until 2021.

Richburg signed a five-year, $47.5 million contract with the Niners in 2018 after spending his first four seasons with the New York Giants.

The former Colorado State lineman played 15 games in 2018 as the anchor on San Francisco's line and 13 more the following season before going down with a torn right patellar tendon in a Week 14 win at New Orleans.

Richburg missed the Niners' run to the Super Bowl that season and never played again as he was also hampered by shoulder and hip injuries.

"I consider myself extremely blessed to have played in this league and am so grateful for the experiences over the last seven years," Richburg said in a statement. "Injuries are an unfortunate part of this game and I’ve reached a point where my body won’t allow me to continue playing and competing at a high level. I was able to play some good football all over the country and was fortunate enough to finish my career with the greatest franchise in sports."

The Niners will carry dead cap hits of about $3.5 million for Richburg in both 2021 and '22 because of his retirement.

Burgess has played 31 career games for Green Bay, the Jets and Cleveland. He has 157 tackles, eight passes defensed, 4 1/2 sacks, two forced fumbles, one fumble recovery and one interception.

Pruitt has 32 catches for 343 yards and four TDs in six seasons with Tennessee, Houston, Minnesota and Chicago.