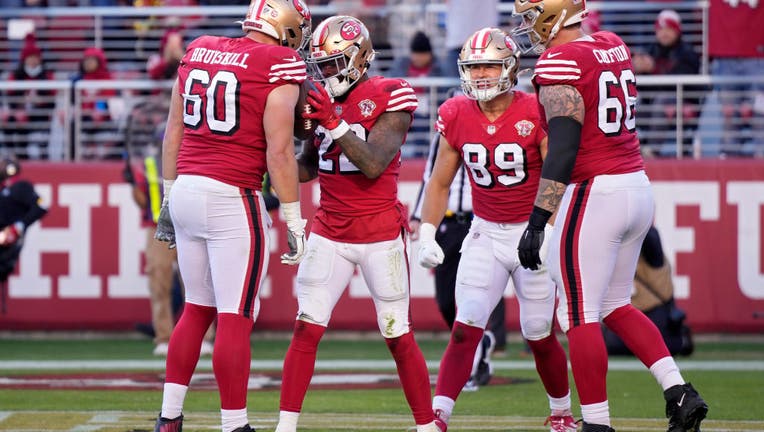 SANTA CLARA, CALIFORNIA - DECEMBER 19: Jeff Wilson Jr. #22 of the San Francisco 49ers celebrates with teammates after rushing for a five-yard touchdown in the third quarter over the Atlanta Falcons at Levi's Stadium on December 19, 2021 in Santa Clar

SANTA CLARA, Calif. - Jimmy Garoppolo threw for 235 yards and a TD, San Francisco ran for three more scores and the 49ers won for the fifth time in six games, beating the Atlanta Falcons 31-13 on Sunday.

The Niners (8-6) scored touchdowns on four straight drives to make easy work of the Falcons (6-8) to remain in wild-card position as the sixth-place team in the NFC.

Atlanta got stopped at the goal line on its first possession of the game and lost a fumble on a strip sack by Nick Bosa on the opening drive of the second half.

That helped the Niners take control as they took advantage of the good field position to drive 38 yards to take a 24-10 lead on Jeff Wilson Jr.'s 5-yard run.

The Falcons settled for a field goal in the red zone on their next possession when pressure by Arden Key forced Matt Ryan into an incomplete pass on third-and-goal from the 4.

Kyle Juszczyk and and Deebo Samuel scored on San Francisco's other TD runs in the first half.

Ryan threw for 236 yards with a 20-yard TD to Russell Gage in the first half, but was under relentless pressure most of the game.

The Falcons struggled near the goal line, running 13 plays from the 10-yard line or closer without scoring a TD, tied for the second-most plays that close to the end zone without a touchdown since 1991.

Bosa's sack was his 15th of the season and gave him sacks in six straight games, the longest for a 49ers player since Aldon Smith did it in seven straight games in 2012.

The 49ers took a 17-10 lead into the half after Samuel took a handoff and scored on a 10-yard run with 33 seconds left in the second quarter.

Samuel has run for a TD in his past five games, giving him seven on the season. His streak is the third longest for San Francisco since the merger, trailing only Raheem Mostert (six in 2019) and Derek Loville (six in 1995).

The Niners got off to a rough start when JaMycal Hasty fumbled the opening kick to give Atlanta the ball at the 12.

But the Falcons couldn’t capitalize after getting a first-and-goal at the 1 with Cordarrelle Patterson getting stopped on two carries and Ryan throwing a pair of incompletions.

After Atlanta scored a field goal on its second drive, Hasty fumbled another kickoff, losing it out of bounds at the 9.

Falcons: WR Tajae Sharpe (foot) left in the second half and didn't return.

49ers: S Talanoa Hufanga (knee) left in the first half and didn't return. ... Bosa left briefly with a head injury but was cleared to return.