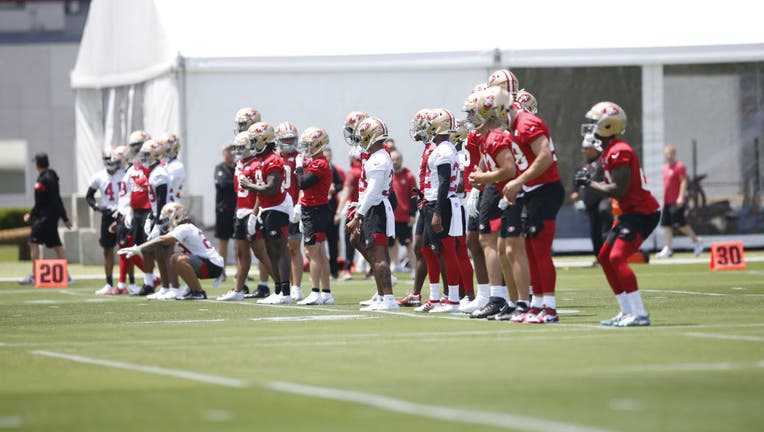 SANTA CLARA, Calif. - The San Francisco 49ers cut short their offseason program by a week when coach Kyle Shanahan sent his veterans home for the summer instead of having them stay in town for a mandatory minicamp next week.

Shanahan said Wednesday he made the decision mostly because of the strong turnout for the voluntary portion of the offseason instead of as a direct reaction to a pair of significant injuries that sidelined safety Tarvarius Moore and offensive lineman Justin Skule on Monday.

Shanahan said his original plan was to practice on Monday and Tuesday this week before surprising players Thursday with a bowling outing instead of practice and telling them minicamp was called off. He ended up doing that Tuesday instead, although some of the rookies will stick around for a little longer.

"The guys came in and really attacked it hard and that’s really what I appreciated," Shanahan said Wednesday. "Our guys never came in and demanded anything. They wanted to know what my plan was. I got a bunch of guys who really love football and who aren’t scared to work. Guys came in and did it each day, did everything we asked for. When they did that, I felt we’d accomplish what we’d set out to do."

The major disappointment from the past month were the injuries that sidelined running back Jeff Wilson Jr., Moore and Skule.

Wilson will miss at least the first six weeks of the season with torn meniscus in his knee after getting hurt getting out of a chair in a fluke injury.

Then on Monday, Moore tore his Achilles tendon during a noncontact drill and Skule tore his ACL a few plays later in a pass-blocking drill.

The 49ers have been snakebitten by injuries in recent years, losing several key starters early in 2020 on the way to a 6-10 finish. San Francisco used 84 players last season, the most in franchise history with the exception of 1987, when replacement players were used during a strike.

Shanahan said the organization constantly evaluates practice schedules to make sure the team is doing whatever it can to keep players healthy but sometimes injuries still happen.

"You’ve got to play football in order to get ready for football and the more football you play the better you are and the longer that you can do it," he said. "Every time you play a sport or every time you do anything, you’ve got a chance to get hurt. So obviously that goes up, but that’s what we’re paid to do. And that’s the only way you can get better at what we do is by doing it."

The 49ers had nearly perfect attendance during the voluntary offseason program, with nearly every healthy player participating. Defensive end Dee Ford returned to the Kansas City area to rehab his injured back after spending the start of the offseason in the Bay Area and defensive end Nick Bosa didn't show up until this week because he was rehabbing his injured knee in Florida.

But the biggest focus between the draft and the start of the summer break was on the quarterbacks position, where No. 3 overall pick Trey Lance is challenging incumbent Jimmy Garoppolo.

"There’s a process of it. Some days you do good, some days you do bad, but there’s a whole up and down with it that is necessary for a guy to go through," Shanahan said of Lance. "So you can get those reps, soak it in, have an idea of what it feels like. Now we have tape to show him, tape to talk to him about, he gets to get away on his own and have an idea of what’s expected out of him when he gets back."

NOTES: Shanahan said he believes 52 of his players have been vaccinated for COVID-19 and he hopes to reach the 85% threshold by training camp in order to loosen restrictions. "I’m just hoping that we do it because I don’t want to have to wear my mask in here anymore," he said. "I want to be able to have team meetings in our normal meeting room and be able to hang out with each other when we go on the road to hotels. So hopefully that’ll work out."... Shanahan confirmed the team will hold joint practices in Los Angeles with the Chargers on Aug. 22. ... Shanahan said the team will spend the week between the first two games of the season at Detroit and Philadelphia practicing at The Greenbrier resort in West Virginia. The Niners spent a week there last year between road games against the Jets and Giants.