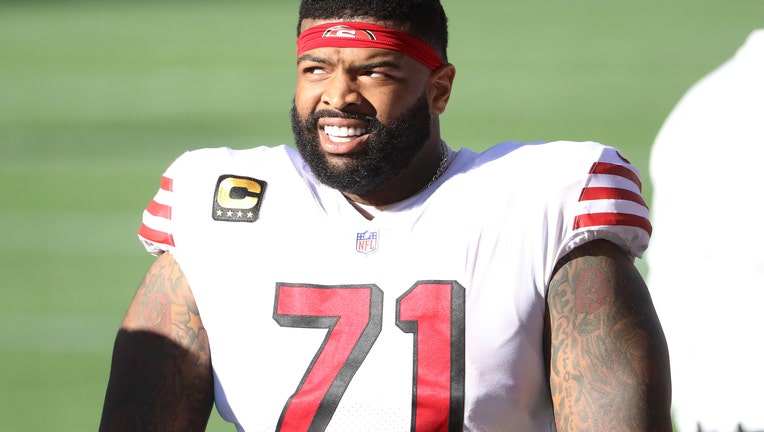 SEATTLE, WASHINGTON - NOVEMBER 01: Trent Williams #71 of the San Francisco 49ers looks on before their game against the Seattle Seahawks at CenturyLink Field on November 01, 2020 in Seattle, Washington. (Photo by Abbie Parr/Getty Images)

SANTA CLARA, Calif. - The San Francisco 49ers locked up their biggest potential free agent for the long term by agreeing to give star left tackle Trent Williams the richest contract ever for an offensive lineman.

Williams’ agents at Elite Loyalty Sports say the deal agreed to early Wednesday will pay Williams $138.1 million over the next six years, surpassing the $138 million deal David Bakhtiari got from Green Bay during last season. Williams also will get the biggest signing bonus ever for an offensive lineman at $30.1 million, as well as $55.1 million guaranteed.

The Niners finalized the deal just hours before Williams could have left to sign with another team at the start of the new league year.

The contract is a staggering reward for Williams, who sat out the entire 2019 season in Washington over a dispute with the front office before reviving his career in San Francisco.

He showed a few signs of rust early but quickly got back to his usual form and earned his eighth Pro Bowl selection. Williams was graded as the top left tackle by Pro Football Focus and is now being paid that way as well.

The 49ers had a disappointing 2020, winning just six games following a trip to the Super Bowl the previous season. But they pinned many of the troubles to injuries that sidelined quarterback Jimmy Garoppolo and other key players like tight end George Kittle and edge rusher Nick Bosa for large portions of the season.

But the biggest piece was Williams, who will anchor an offensive line that struggled at several of the other spots last season. San Francisco also wants to upgrade at center, with starter Weston Richburg not expected to return from an injury that sidelined him for the entire 2020 season.

The Niners acquired Williams from Washington during last year’s draft for a 2020 fifth-round pick and 2021 third-rounder.

Williams had sat out the entire 2019 season in Washington. He was at odds with the organization when he refused to play because he said he distrusted the medical staff and front office because of a botched cancer diagnosis.

He ended his holdout and hoped to be traded before the deadline, but a deal never happened. Williams was banished from the facility by former team president Bruce Allen.

Williams thought there was a chance to stay when coach Ron Rivera was hired and there was an overhaul to the organization. But ultimately Williams wanted out and was traded to San Francisco, where he reunited with Shanahan, who was the offensive coordinator in Washington for his first four seasons.