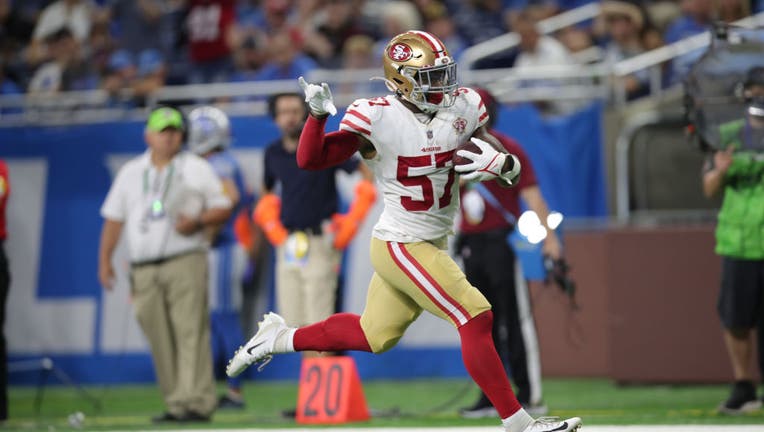 DETROIT, MI - SEPTEMBER 12: Dre Greenlaw #57 of the San Francisco 49ers returns an interception for a 39-yard touchdown during the game against the Detroit Lions at Ford Field on September 12, 2021 in Detroit, Michigan. The 49ers defeated the Lions 4

SANTA CLARA, Calif. - The San Francisco 49ers placed linebacker Dre Greenlaw on injured reserve Saturday with a groin injury that will likely sideline him for at least a month.

Greenlaw first injured the hamstring in training camp and then it got worse in a season-opening 41-33 win at Detroit last week when he returned an interception for a touchdown.

"It started to get better. I think he re-tweaked it on that pick-six, that’s when he started complaining about it," coach Kyle Shanahan said. "We took him out, hoping that calming him down it would get better, but it just hasn’t this week. So, we had to make that decision. I know guys who usually have had that around four to six weeks. Hoping it’s that but you never know."

Greenlaw has been a steady presence alongside Fred Warner for San Francisco since being drafted in the fifth round in 2019. He has 184 tackles, 10 tackles for loss and two interceptions in 30 career games.

Azeez Al-Shaair will likely take Greenlaw's spot at weakside linebacker with Demetrius Flannigan-Fowles stepping into Al-Shaair's strongside spot when San Francisco is in base defense.

Al-Shaair had seven tackles, two tackles for loss and two passes defensed in the season opener.

"I thought Azeez live was one of the best players on the field, just flying around. I bet it looked that way a little bit on TV, too," Shanahan said. "Then when I watched the film on the plane it was confirmed. I thought that he had a hell of a day, hell of a game, and he’s got some playing time in for us over the last few years. I thought he had his best game there and I expect it to keep just getting better."

Greenlaw is the third starter who went down with a significant injury in the opener, with cornerback Jason Verrett and running back Raheem Mostert both suffering season-ending knee injuries.