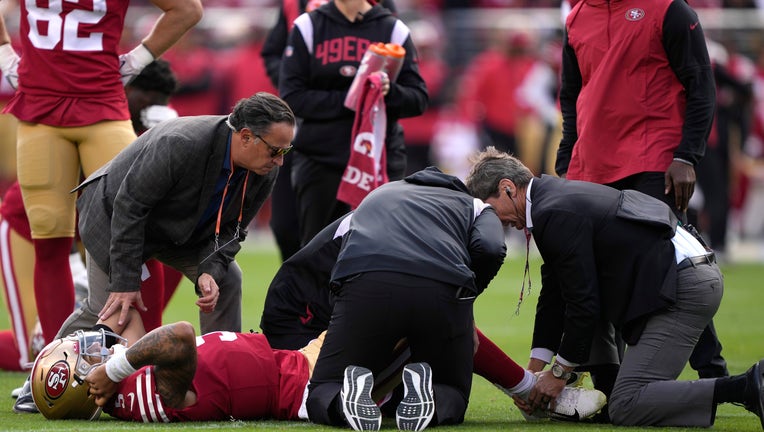 SANTA CLARA, CALIFORNIA - SEPTEMBER 18: Trey Lance #5 of the San Francisco 49ers is tended to after an apparent injury following a play against the Seattle Seahawks at Levi's Stadium on September 18, 2022 in Santa Clara, California. (Photo by Thearon

San Francisco 49ers starting quarterback Trey Lance is out for the season after breaking his ankle on Sunday.

Lance, took a hit during the first quarter of the game against the Seattle Seahawks and was quickly ruled out for the rest of the game. According to the 49ers, Lance's injury will require surgery.

Jimmy Garoppolo, the 49ers starting quarterback last season, played the rest of the game and led the Niners to a 27-7 win over the Seattle Seahawks.

Lance was heavily criticized after his week one performance in Chicago he completed 13 of his 28 pass attempts, tallying 164 yards. He threw one interception and zero touchdowns.

Last week, 49ers Head Coach Kyle Shanahan was asked if he was concerned about the amount of time Lance got hit and spent on the ground.

"We will watch the tape, I'll ask him how he feels," said Shanahan. "That's the kind of game it was."