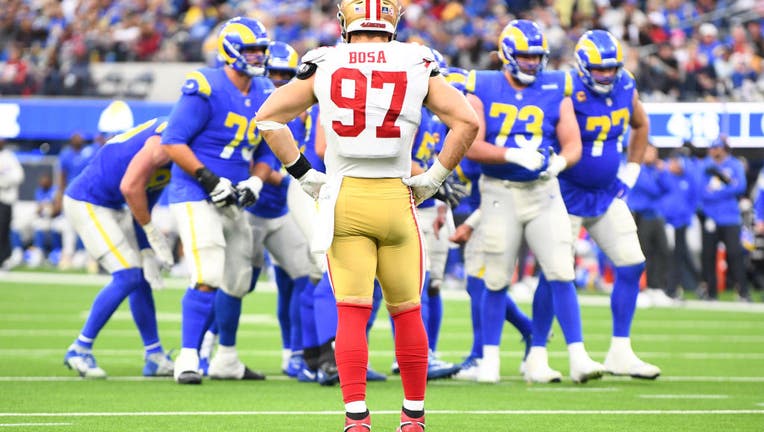 Kyle Shanahan and Sean McVay arrived in California five years ago, a pair of hot-shot young coaches with a shared history and similar offenses taking over struggling franchises.

Shanahan took the San Francisco 49ers to the Super Bowl his third season, and he has them a game away from another trip this year only to have his former colleague on Washington's staff, McVay, standing in the way.

McVay has had even more success, leading the Los Angeles Rams to a playoff berth his first season, a Super Bowl trip the following season and then back-to-back playoff berths the past two seasons, including a trip to the NFC championship game against Shanahan's 49ers on Sunday.

The head-to-head battle has been far more one-sided, with the 49ers winning the past six meetings, leading to questions this week to McVay about whether his old friend has gotten into his head.

"No," McVay said. "What I do have is respect for these guys. They’ve done a great job."

Shanahan also downplayed the coach vs. coach aspect of the rivalry, preferring to focus on the players rather than the guys calling the plays.

The Frenchie Faithful are hoping to cheer the 49ers to victory when they meet the Rams in the NFC championship game.

Even if it seems like Shanahan has always had the right answer against the Rams these past three seasons even when he hasn't had as talented a team.

A 49ers super fan who was inducted into the Pro Football Hall of Fame as the team's "Number one fan" shares his story and memorabilia dating back to the first game he attended at Kezar Stadium in 1952. 70-years later, he's ready for the team to face the Rams in the NFC Championship game this weekend.

"I think that’s kind of silly," he said. "I think a question like that is just giving Sean and myself way too much credit. We’re coaches, like watch what’s going on that field and some of the players out there and the people that are competing. To think that it’s about Sean and I, I know he doesn’t feel that way and he knows I don’t feel that way. So the entertainment of this business is cool because it brings a lot of fans and brings a lot of money for everybody, but I think that’s kind of pretty ridiculous. I don’t give coaches that much credit."

There has been plenty of entertainment even if the final results have been one sided in recent years.

The Niners knocked the Rams out of playoff contention with a comeback win in 2019 and then swept the season series last season despite going 6-10. They dominated the first game this season before rallying back from 17 points down to win the season finale in overtime to get into the playoffs.

There also has been memorable words, with Jimmy Garoppolo talking about taking the Rams' soul away with a physical game-opening drive in November and then Niners tight end George Kittle calling the finale a "body-bag game."

Kittle said he meant no offense by that comment, saying it was just important to be physical against the Rams. But it apparently stung since Los Angeles players brought it up on the field during the game and it's been a topic again this week.

The rivalry is just the latest distillation of the ongoing competition between the Bay Area and Los Angeles that encompasses food, culture, music, weather, and of course, sports.

Whether it's the Giants vs. the Dodgers in baseball, the Warriors and Lakers in the NBA or this one on the gridiron, there's always a little more on the line when teams from these two regions meet.

The fans get into as well, with the 49ers faithful taking pride in taking over SoFi Stadium back in Week 18 so much that the Rams needed to use a silent count at times on offense.

That led to pleas from some of the wives of Rams players to their own fans not to sell tickets to Bay Area fans.

That doesn't seem to be working with ticket reseller StubHub projecting a heavy Northern California contingent at the game.

"Hopefully we’ll have a sea of red down at SoFi and turn it into Levi’s South," Niners kicker Robbie Gould said.

The McVay-Shanahan chapter is just the latest in a rivalry that dates to 1950 when these teams were the only California squads in the NFL.

The game Sunday will the 146th ever between the teams and just the second in the postseason. The Niners beat the Rams 30-3 in the 1989 NFC title game on the way to back-to-back Super Bowl wins.

While the 49ers have the slight advantage overall with a 75-67-3 mark, the rivalry has featured long runs of dominance on both sides. The Rams held the upper hand in the 1970s and 2000s, and the Niners dominated for most the 1980s and '90s.

Now San Francisco hopes to extend its current streak with a seventh straight win in a matchup of teams that know each other so well.

"I don’t think there’s many secrets," Shanahan said. "There’s not much things we can surprise them with and same with them with us, which I think is kind the most fun way. It’ll be two really good teams and a really good football game where you can’t really trick each other. You have to go out and beat somebody."