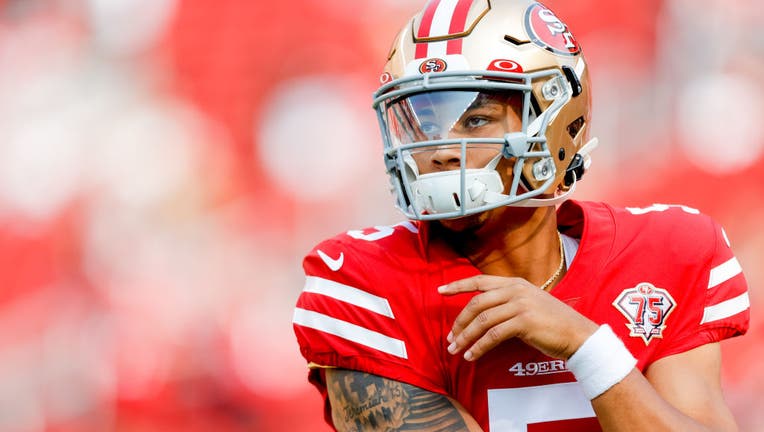 SANTA CLARA, Calif. - Rookie quarterback Trey Lance's injured finger is showing signs of healing and the San Francisco 49ers are hopeful he will be able to return to practice next week.

Lance hurt his finger when he was hit on his right hand by the helmet of Las Vegas Raiders linebacker Max Richardson on Sunday during an exhibition game.

Lance was diagnosed with a small chip fracture and is unable to practice this week.

"It’s trending in the right direction," general manager John Lynch said Wednesday. "Some of the swelling is coming down. Monday is kind of an optimistic look at it. I can promise you this, we’ll do right by Trey and have him in a good place before he’s back out there. We certainly would love to have him available on Monday."

San Francisco traded three first-round picks to take Lance third overall in the draft in April. He is expected to get time in certain packages behind starter Jimmy Garoppolo when the season begins on Sept. 12 at Detroit.

For that to happen in the opener, the Niners would need for Lance to be able to practice next week.

The 49ers made some roster tweaks Wednesday, placing defensive tackle Maurice Hurst (ankle) and cornerback Davontae Harris (hamstring) on injured reserve. Both players will be eligible to return after missing three weeks.

Lynch called that a good sign of the depth the Niners had during training camp but it takes away an option at punt returner with Webster having had a shot to take that role had he cleared waivers.

Lynch said coach Kyle Shanahan would address the punt return situation later but starting receiver Brandon Aiyuk could be an option after excelling on returns in college at Arizona State, or Travis Benjamin could be brought up from the practice squad to handle that role.