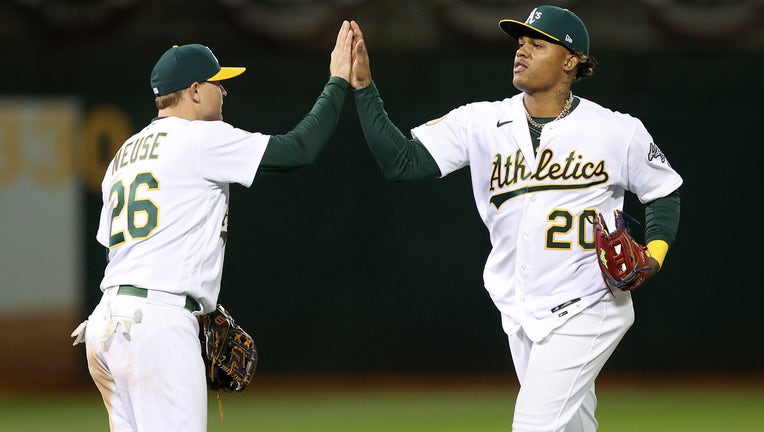 OAKLAND, Calif. - Seth Brown hit a two-run double in the sixth inning, Cristian Pache made another spectacular defensive play and Oakland beat the Baltimore Orioles 2-1 on Tuesday night before the Athletics' smallest home crowd in 42 years.

A day after their lowest attendance for a home opener without coronavirus restrictions in more than 30 years, the A’s drew 3,748 — the smallest with fans at the Coliseum since 3,180 attended a 6-4 loss to the Chicago White Sox on Sept. 25, 1980.

Elvis Andrus and Christian Bethancourt both had two hits and scored to help Oakland to its seventh win in 10 games after an 0-2 start.

Anthony Santander and Trey Mancini each had two hits for the Orioles, whose $48 million payroll is last in the majors. The A's are 29th at $58 million.

Brown, who threw out a runner at home from right field a night earlier, came through at the plate. After Bethancourt singled and Elvis Andrus walked, Brown lined an 0-1 pitch off Mike Baumann (1-1) into right-center .

Pache, part of the trade that sent two-time Gold Glove first baseman Matt Olson to the Braves, added to a growing list of stellar plays he’s made for the A’s while outfielder Ramon Laureano serves the remainder of his 80-game suspension for testing positive for a banned substance, which extended through the first 27 games of this season.

Pache robbed Baltimore’s Kelvin Gutiérrez of a hit in the second inning when he crashed into the center-field fence as the ball popped out of his glove, then reached out and caught the ball while tumbling to the turf. Gutiérrez was nearing second base and slapped his left hand on his batting helmet in disbelief as Pache got up, smiled and flexed. In the eighth, Pache ran down Austin Hays deep fly to center and made the catch just before the wall.

Zach Logue retired four batters to win his major league debut. Zach Jackson struck out Santander on a checked swing with a runner at first for his first big league save.

The Orioles scored a run off Cole Irvin in the first. Santander singled, Ryan Mountcastle doubled and Mancini followed with an RBI grounder.

Chris Ellis pitched 4 1/3 innings without allowing a run after being called up from Triple-A Norfolk before the game to start for the Orioles. The right-hander pitched around traffic for much of his outing, giving up four hits with three walks and two strikeouts.

Orioles outfielder DJ Stewart was designated for assignment to make room for Ellis on the 40-man roster. RHP Marcos Diplán was optioned to Norfolk.

Athletics: 3B Kevin Smith is wearing a walking boot and will be evaluated for a possible leg injury following an awkward slide into first base Monday night. Manager Mark Kotsay is uncertain whether Smith will need to go on the injured list.

Orioles RHP Jordan Lyles (0-1, 5.23 ERA) has three wins in eight career appearances against Oakland. A’s RHP Daulton Jefferies (1-1, 1.93 ERA) makes his fourth career start and first against Baltimore. Due to weather, the start of the game was moved up to 3:07 p.m.