The Indianapolis Colts and New York Jets will clash in a midweek showdown Thursday night on FOX.

INDIANAPOLIS - The Indianapolis Colts haven't hosted a prime-time game since December 2017, but that all changes Thursday night when they welcome the New York Jets to Lucas Oil Stadium.

Both squads enter Thursday’s game with losing records. At 2-5, the Jets have fared slightly worse this season than the 3-5 Colts. But unlike the Indy, New York is coming off a victory — and a quality win at that.

The Jets bested the Cincinnati Bengals 34-31 last week with 17 points in the final quarter. Mike White, who filled in at quarterback for the injured Zach Wilson, played like anything but a quarterback making his first professional start.

The fourth-year pro out of Western Kentucky carved up the Bengal defense for 405 yards and three touchdowns. His 37 completions were the most by a quarterback in his first NFL start.

Wilson is still nursing a sprained knee, so White will get the start again under center. 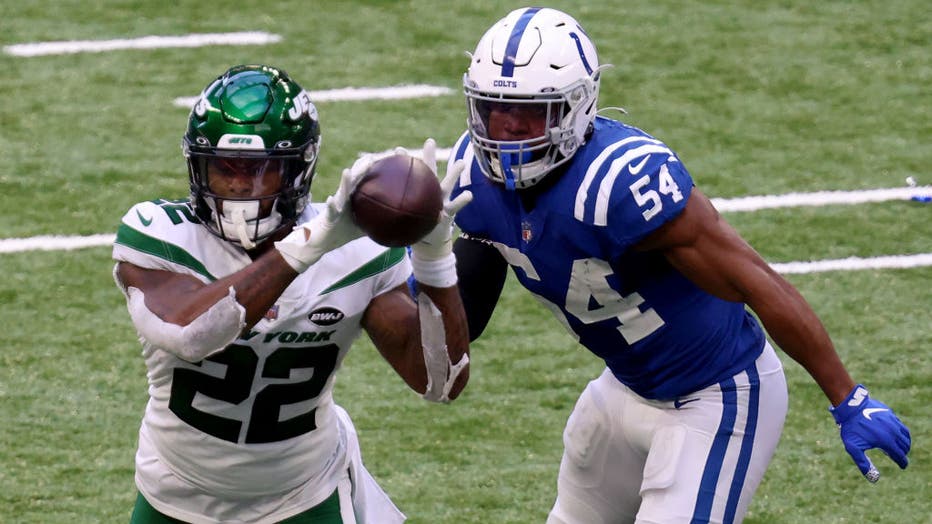 La'Mical Perine, No. 22 of the New York Jets, catches a pass while being defended by Anthony Walker, No. 54 of the Indianapolis Colts, at Lucas Oil Stadium on Sept. 27, 2020, in Indianapolis, Indiana. (Photo by Justin Casterline/Getty Images))

Meanwhile, the Colts fell in an overtime thriller to the Tennessee Titans — putting them three games behind their Nashville rivals. Quarterback Carson Wentz shoulders the blame for Sunday’s loss, giving away 10 points to the Titans in the final 7 1/2 minutes.

Outside of that, he had put on an efficient display of quarterbacking through the first seven games. But the Colts’ most consistent form of offense has come on the ground.

Running back Jonathan Taylor has carried Indy to the end zone seven times this season. The second-year man out of Wisconsin has rushed for six scores and 649 yards this year and caught another touchdown and totaled 265 receiving yards.

He’s a big reason why the Colts have the 12th-best rushing attack in the league. And Thursday, he's matched up against the Jets' defense that ranks 28th overall.