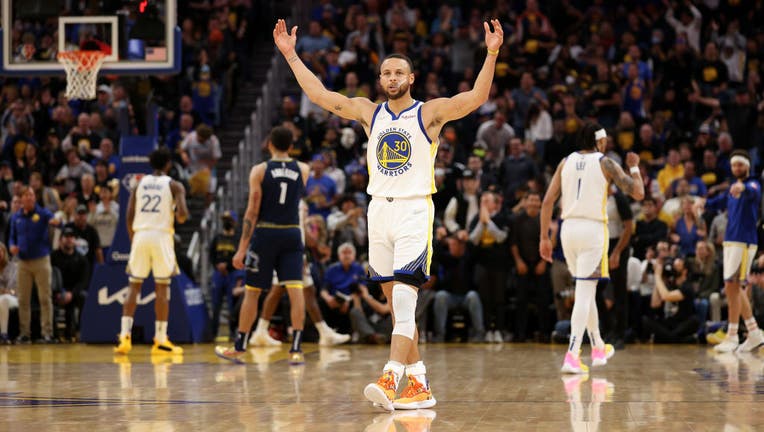 SAN FRANCISCO, CALIFORNIA - MAY 09: Stephen Curry #30 of the Golden State Warriors reacts during their game against the Memphis Grizzlies in Game Four of the Western Conference Semifinals of the NBA Playoffs at Chase Center on May 09, 2022 in San Fra

Stephen Curry converted eight free throws over the final 45.7 seconds on the way to 32 points, leading the Golden State Warriors’ fourth-quarter comeback for a 101-98 victory over the Memphis Grizzlies on Monday night and a 3-1 lead in the Western Conference semifinals.

Curry also dished out eight assists and grabbed five rebounds as Golden State rallied to win without coach Steve Kerr after he tested positive for COVID-19 less than two hours before tipoff.

Curry took charge just like he has so many times on the playoff stage and now his Warriors are one win from a trip to the Western Conference finals for the first time since 2019. He tied it at 90 on a fall-away baseline jumper with 3:25 to go and his two free throws with 45.7 seconds to go gave the Warriors a 94-93 lead, their first of the night.

It remained unclear whether Morant would be back for Game 5 on Wednesday in Memphis.

The two teams have alternated victories in this best-of-seven series, which continues Wednesday with Game 5 in Boston.

Horford scored 16 points and Tatum 12 in the fourth quarter alone to help the Celtics outscore the defending NBA champion Bucks 43-28 in the final period. Horford’s 30 points were a career playoff high for the 35-year-old veteran.

Tatum scored eight points and Horford had six during a 14-2 run that put the Celtics ahead for good and gave them a 106-96 advantage with 3:33 left. The Bucks wouldn’t cut the margin below six the rest of the way.

Giannis Antetokounmpo had 34 points, 18 rebounds and five assists for the Bucks.