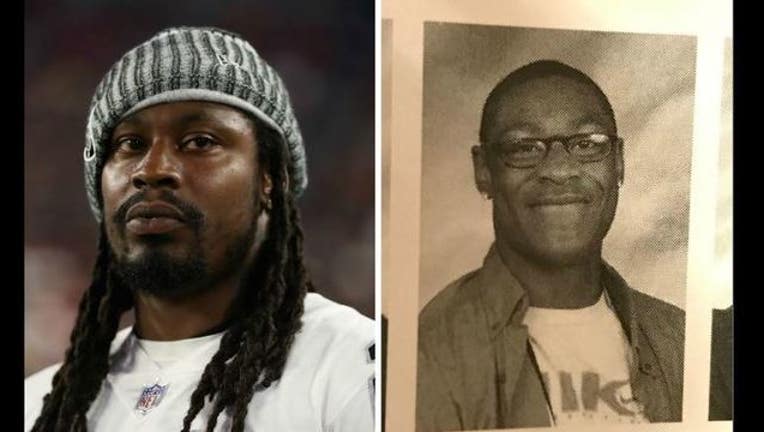 Marshawn Lynch played for the Raiders and attended Oakland Tech High (right: yearbook picture). He earned the name "Beast Mode" for his powerful running style and ability to run over defenders and break tackles.

OAKLAND, Calif. (BCN) - Football is staying in Oakland with the advent of an Indoor Football League franchise founded in part by NFL great and Oakland native Marshawn Lynch.

The Oakland Panthers will play at the former Oracle Arena, now Oakland Arena, starting in spring 2020, according to the Panthers franchise. The team will be part of the Indoor Football League and play seven home games in Oakland.

"I believe the power of football has the ability to transform a community and the families who live there," Lynch said in a statement. "I've seen it and lived it. I'm excited that Da' Town will get another team to call its own," Lynch added.

Lynch said that he attended some indoor football games last year and had a good time. He said tickets are priced so the whole family can go to a game.

The "Panthers" team name was chosen for more than one reason. The name refers to the Bay Area's indigenous cougar, the recent blockbuster film Black Panther and the city's history of activism in the Black Panther movement of the 1960s.

Choi, who already owns two IFL teams, said, "Oakland and the Bay Area embody activism, work ethic, passion and loyalty. Those qualities are represented by the Panther name and by my co-founder Marshawn Lynch."

Lynch played 11 seasons in the NFL, starting with the Buffalo Bills in 2007. He was traded to Seattle Seahawks midseason in 2010, where he excelled and helped the franchise win its first Super Bowl championship in 2014, before retiring in 2018 following two years with his hometown Raiders.

The IFL has 12 teams and is the longest operating professional indoor football league in the nation. It was founded in 2008.