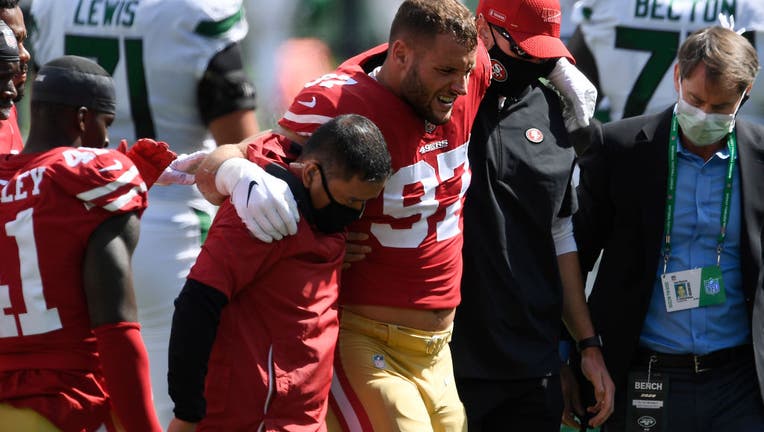 EAST RUTHERFORD, NEW JERSEY - SEPTEMBER 20: Nick Bosa #97 of the San Francisco 49ers is helped off the field after an injury during the first half of the game against the New York Jets at MetLife Stadium on September 20, 2020 in East Rutherford, New

SANTA CLARA, Calif. - Nick Bosa has made substantial progress over the last few months as he attempts to return from a torn ACL that kept him out nearly all of last season.

The San Francisco defensive end was a limited participant in the team’s first two practices of training camp, followed by a maintenance day Friday. The knee has held up well to this point, putting Bosa on track to play in the Sept. 12 season opener against the Detroit Lions.

"I knew when it was an early injury (last season) that I’d, for the most part, probably be ready to go for Week 1, and everything right now is trending towards that," he said. "So I’m hoping to ramp it up as I go and be ready to give it all I got for Week 1."

Bosa took the league by storm in 2019, recording 47 tackles, nine sacks and 16 tackles for loss. For his efforts, he was named the NFL's Defensive Rookie of the Year.

"You come off 2019 and you’re on top of the world, and then you start off well in your next season and it’s all taken away really quick," he said. "It was tough. Mentally, it’s really rough and when your body feels terrible, your mind kind of goes to that place."

Bosa, 23, found a way to stay positive throughout the rehab process and his hard work has paid off. He says the knee has responded even better than he could have imagined.

"I’m moving better than I ever have right now," Bosa said. "I’m very confident in how I’m going to feel out there on the field this year."

Added coach Kyle Shanahan: "Nick takes care of himself and better than anyone I’ve ever been around. I mean, the guy has got a one-track mind and it’s awesome. So you knew he’d come in great."

Bosa’s return, along with that of fellow defensive end Dee Ford, who missed the final 15 games last season with a back injury, is already bringing back memories of San Francisco’s dominant defensive line in ’19. That unit led the team to 13-3 record and a trip to the Super Bowl.

"It's just good to have (Bosa and Ford) back," he said. "Having them back just gives not only a boost to the whole defense but to the entire team."

NOTES: Shanahan said tight end MyCole Pruitt would miss some time with a calf injury. Pruitt signed with the 49ers in June after spending the last three seasons with the Tennessee Titans. ... Defensive lineman Maurice Hurst missed Friday’s practice with a minor ankle injury. He is considered day-to-day.