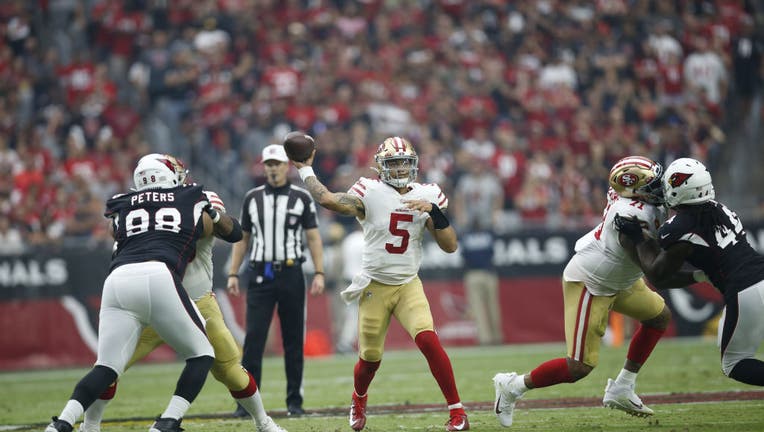 GLENDALE, AZ - OCTOBER 10: Trey Lance #5 of the San Francisco 49ers passes during the game against the Arizona Cardinals at State Farm Stadium on October 10, 2021 in Glendale, Arizona. The Cardinals defeated the 49ers 17-10. (Photo by Michael Zagaris

SANTA CLARA, Calif. - The play so far this season from the San Francisco 49ers quarterbacks has been mostly what was expected.

Jimmy Garoppolo has been solid but unspectacular but once again got hurt, showing why the Niners traded three first-round picks to take Trey Lance third overall in the spring.

The untested Lance has been up and down in his six quarters in place of Garoppolo, showing off the arm strength and running ability that made him a prized prospect but also some inaccuracy and questionable decision making that led to coach Kyle Shanahan's decision to open the season with Garoppolo as starter.

Now as the Niners (2-3) rest up in their bye week, the biggest question going forward is whether Lance showed enough in a half against Seattle and a loss at Arizona on Sunday to change the timeline of when he will take over for Garoppolo, assuming both recover from some minor injuries that kept them in town rehabbing this week.

"It doesn’t change my opinion, big picture," Shanahan said. "Trey definitely has the ability to help us win games. I thought he was a big part of why we had a chance to win that game (against Arizona.) I just wish we could’ve played better around him, too. Not that he was perfect by any means, but he gave us a very good chance to win that game. ... But it’s more of a decision than just which player do you want to go with? There’s a whole team here. There’s a lot more that goes into it.

"These three losses that we’ve had in a row, the answer good or bad is not just the quarterback. We’ve got to play better all around."

After opening the season with back-to-back road wins at Detroit and Philadelphia, the 49ers have fallen into a bit of a rut.

They allowed Aaron Rodgers to drive Green Bay to the winning score in the final 37 seconds in a Week 3 loss.

The special teams proved costly the following week in a loss to the Seahawks with a fumbled kickoff setting up a touchdown for Seattle.

Last week against the Cardinals, the offense couldn't punch it in at the goal line early in the game and was stopped on three other fourth-down tries.

"So that’s the main thing I try to stress to our team, that it’s always going to be hard when you lose games in this league," Shanahan said. "But you can’t let a narrative become your reality. You’ve got to watch the tape, you’ve got to work harder, you’ve got to get better at all these little details that come down to winning and losing in crucial moments."

But the biggest question remains at quarterback, where Garoppolo is hoping to be able to return from a calf injury to play against the Colts after the bye and Lance hopes a sprained left knee won't hold him out.

Shanahan has said Garoppolo will remain the starter when healthy, but how long that sticks remains to be seen. He has been unable to match his efficiency he had during the 2019 season when San Francisco went 13-3 and went to the Super Bowl. His completion percentage, yards per attempt and passer rating are all down from that season.

Lance has been up and down during his brief time so far. He threw a TD pass and ran for a score during brief action the first three weeks and then overcame a shaky first couple of drives to throw two TDs in the loss to the Seahawks.

He had an early interception against the Cardinals and completed just 51.7% of his passes, but also accounted for 281 yards through the air and on the ground.

But it has added up to three straight losses for a team that came into the season with Super Bowl aspirations.

"I’m trying to look at each game right now and we’ve lost three tough games in a row. Three games I think we could have won," Shanahan said. "We can clean things up and play a little bit better. So, I’m not thinking about that right now. I’m thinking about trying to beat Indy as soon as we come back."