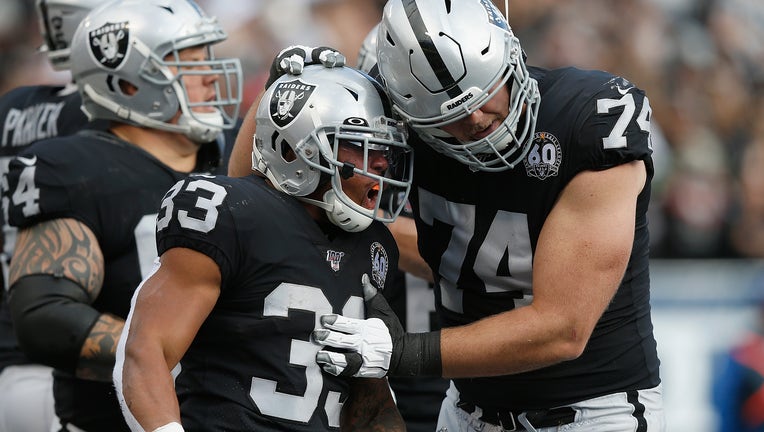 OAKLAND, CALIFORNIA - DECEMBER 08: DeAndre Washington #33 of the Oakland Raiders celebrates with Kolton Miller #74 after scoring a touchdown in the first quarter against the Tennessee Titans at RingCentral Coliseum on December 08, 2019 in Oakland, Ca

LAS VEGAS - The Las Vegas Raiders placed four starting offensive linemen and safety Johnathan Abram on the reserve/COVID-19 list after they were determined to be close contacts with a teammate who had tested positive for the coronavirus.

Abram, Kolton Miller, Denzelle Good, Rodney Hudson and Gabe Jackson were all placed on the list Thursday because of high-risk contact with right tackle Trent Brown, who was placed on the COVID-19 list Wednesday following a positive test for the virus.

If those players remain asymptomatic they must wait five days from their last contact with Brown on Monday and test negative each day before they will be allowed to return.

That gives them enough time to return to play on Sunday against Tampa Bay if they don’t test positive or develop symptoms before then. The league moved the schedule for Sunday night against the Buccaneers into the afternoon window out of an “abundance of caution” to make sure a game would be available for NBC’s “Sunday Night Football.” The Seattle-Arizona game was moved into the prime-time slot.

The league and union are also investigating how the Raiders have handled the coronavirus protocols. One person familiar with the investigation said that Brown was not consistently wearing his tracker which is used to help determine close contacts.

Enter the NFL Challenge contest on the FOX Super 6 app for free and you can win the $1M jackpot! Download now!

The team also was supposed to be in the league’s “intensive” protocol on Monday after cornerback Damon Arnette was placed on the COVID-19 list, which requires proper distancing and mask wearing at practice. The person said video shows the starting offensive linemen were not following the protocols.

The person spoke on condition of anonymity because details weren’t released.

“We haven’t changed our routine at all,” offensive coordinator Greg Olson said. “Obviously, our numbers are down a little bit. But as far as our practice, you continue with business as usual and next man up mentality so nothing’s really changed.”

While preparing for a game without the entire starting offensive line is the biggest challenge, losing Abram would be a big blow to the defense.

He sets the tone with his physical play in the secondary and has been one of the better players on defense this season.

“John’s a big part of what we do,” defensive coordinator Paul Guenther said. “We’ll just have to see with John whatever the situation is. He’s playing great. If not, we have to have somebody step up in his place and play at a high level.”

The Raiders have had several issues with the coronavirus protocols already this season. Coach Jon Gruden was fined $100,000 and the team fined $250,000 after Gruden didn’t wear his mask properly in Week 2. The team was also fined $50,000 for allowing an unauthorized employee into the locker room after that game.