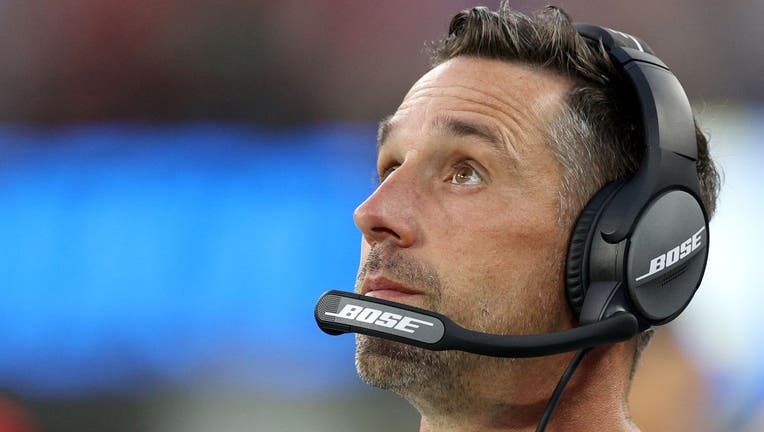 SANTA CLARA, Calif. - Coach Kyle Shanahan is pretty sure who will start at quarterback to open the season for the San Francisco 49ers, even if he’s in no rush to let everyone else know whether it’s Jimmy Garoppolo or Trey Lance.

Shanahan has said he will wait possibly up until the season opener on Sept. 12 at Detroit to announce his starter but also has said nothing has changed since the start of training camp when Garoppolo came in as the No. 1.

"I’ve got a pretty good idea," Shanahan said Wednesday. "But as you guys can see with everything, I don’t know our schedule a couple of days from now. So, I’ve always had a pretty good idea. But there’s lots of days between now and then, at every position."

All signs continue to point to Garoppolo keeping the job for now over the rookie Lance as he has gotten the bulk of work with the starters in training camp and Lance has shown some predictable growing pains after playing only one game in 2020 because of the coronavirus pandemic.

When Garoppolo was asked before practice if he had a good idea about who Shanahan planned to start, he said yes and laughed.

"It’s whatever he decides," Garoppolo said. "I have a pretty good idea. I’m pretty happy with where I’m at right now and everything, just the offense as a whole. Kyle’s the head man. He’ll make the call."

While Denver and Jacksonville announced their Week 1 starters at quarterback Wednesday, Shanahan said he sees no benefit in doing the same other than ending questions about it.

"If you could give me another reason that it’s a big advantage that helps our team, affects anything that has to do with us, then I will name it," he said. "But I don’t think it does. Why tell people? I know you guys want an answer, which is fine. I get the suspense of it, but I’m not just going to answer it to end your guys’ suspense."

Lance did work with the starters for a handful of plays in practice Wednesday and for the first time this camp Garoppolo got time with the second string.

Even if Garoppolo starts, the Niners plan to mix in Lance in certain situations to take advantage of his ability to run and to get him ready to eventually be the full-time starter. The team invested three first-round picks in him this offseason.

Garoppolo said shuttling in and out will take time to get used to after being accustomed to handling the full load. Former Saints quarterback Drew Brees visited the 49ers-Chargers joint practices last week and Garoppolo said they talked about how Brees handled being taken out at times for the mobile Taysom Hill the past few years in New Orleans.

"Just kind of stay ready type of thing," Garoppolo said. "It’s a different type of flow to the game. As the quarterback, you’re used to being out there the whole time. So it’s just something that you just have to get reps in and get used to it."

NOTES: DE Nick Bosa took part in his first team drills as he works his way back from last year’s season-ending knee injury. He had a sack on one of his first plays in practice. ... S Jaquiski Tartt (toe) was activated from the physically unable to perform list and he could get into game action in Sunday’s exhibition finale against the Raiders. ... LT Trent Williams (knee), CB Emmanuel Moseley (hamstring), DT Javon Kinlaw (shoulder) and WR Jalen Hurd (knee) all returned to practice.