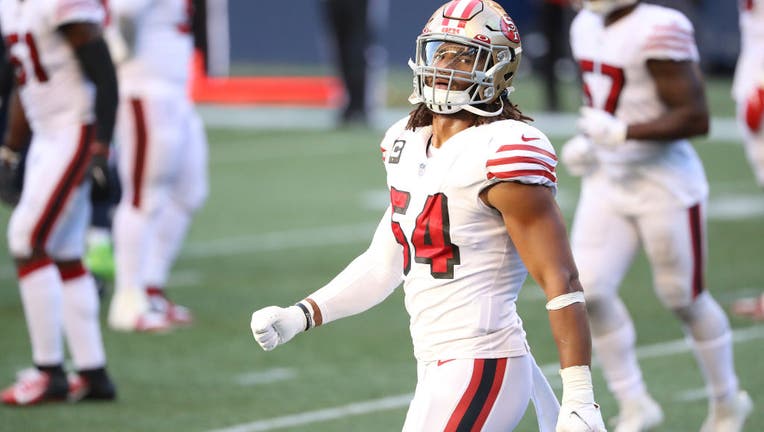 SEATTLE, WASHINGTON - NOVEMBER 01: Fred Warner #54 of the San Francisco 49ers reacts after David Moore #83 (not pictured) of the Seattle Seahawks scored a touchdown in the third quarter at CenturyLink Field on November 01, 2020 in Seattle, Washington

SANTA CLARA, Calif. - The San Francisco 49ers agreed on a five-year contract extension with Fred Warner that makes him the highest-paid off-ball linebacker in the NFL.

A person familiar with the deal said Wednesday that the extension that runs through 2026 is worth about $95 million with $40.5 million in guarantees. The person spoke on condition of anonymity because the team hadn't announced the deal yet.

The deal tops the $18 million a year average for Seattle's Bobby Wagner, which had been the top at the position.

Locking up Warner with a long-term deal was one of the key tasks for San Francisco before the start of training camp next week.

This contract comes on the heels of the $75 million, five-year contract extension that star tight end George Kittle got last summer as the Niners do their best to keep their young core players. They were unable to do that with defensive tackle DeForest Buckner, who was traded for a first-round pick to Indianapolis in 2020 instead.

Coach Kyle Shanahan said during the offseason program that he planned to have Warner around "forever" and this new deal helps achieve that goal.

The former third-round pick has developed into one of the top all-around linebackers in the league after being drafted in the third round in 2018.

Warner made an immediate impact, starting all 48 games since entering the league. He helped San Francisco make it to the Super Bowl in his second season and then earned first-team All-Pro honors in 2020.

Warner is a skilled all-around linebacker, thriving in coverage and against the run. The 54% completion rate he allowed last season when targeted as the nearest defender ranked the best in the NFL among the linebackers targeted at least 20 times, according to NFL NextGen stats.