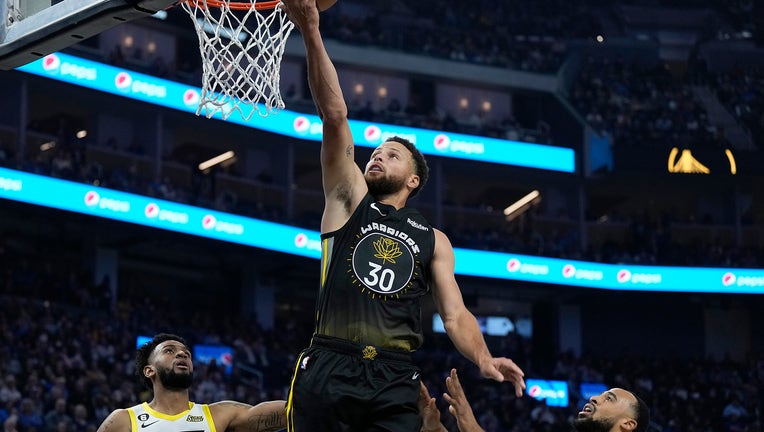 SAN FRANCISCO, CALIFORNIA - NOVEMBER 25: Stephen Curry #30 of the Golden State Warriors goes in for a layup against the Utah Jazz during the first quarter at Chase Center on November 25, 2022 in San Francisco, California. NOTE TO USER: User expressly

This is the second time Curry was given the honor. In 2018, Curry and the entire Warriors team received the award in 2018 after winning three championships in four years. LeBron James, Tiger Woods and Tom Brady are the only other athletes who have won the award more than once.

Curry won the award in part for what he has done on the court. In June, he was named NBA Finals MVP after leading the Warriors to a fourth title in eight years. In February, he was named MVP of the NBA All-star game, he was named to the All-NBA second team and won the first ever Magic Johnson Western Conference finals MVP Award.

But, as Sports Illustrated noted, what Curry has done off the court is arguably more impressive.

"He graduated from Davidson, 13 years after he left for the NBA following his junior season. He expanded his charitable reach: Since 2019, the Eat. Learn. Play. Foundation he and Ayesha founded has served more than 25 million meals to food-insecure children, spent $2.5 million on literacy-focused grants and distributed 500,000 books, according to Curry’s representatives. He has also provided seed funding for men’s and women’s golf teams at Howard University, a historically Black school, and started the Underrated Golf Tour, a junior circuit designed to make the game more inclusive. He is co-chair of Michelle Obama’s When We All Vote initiative. And now we name him Sports Illustrated’s Sportsperson of the Year."

The article details the way Curry carried out all of his accomplishments, and said it is what made it more impressive.

"He passionately seeks greatness without being consumed by it. He reminds us that stardom is not a license to be a jerk, and being a jerk is not a prerequisite for stardom. Longtime NBA fans can recite many stories about Michael Jordan and Kobe Bryant belittling teammates to motivate them. There are no such stories about Curry. He can go weeks without giving anybody a pep talk, and, when he does, it’s usually pretty short: Come on! Lock in!"

Curry and the Warriors are off to a 13-12 start this season, they currently sit in 10th place in the western conference.