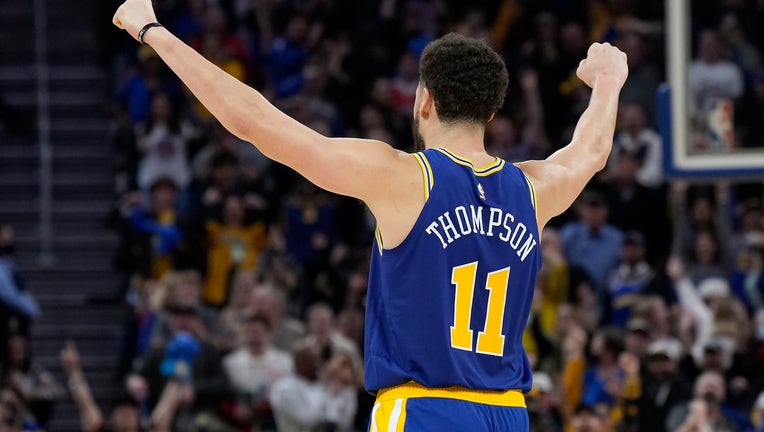 SAN FRANCISCO, CALIFORNIA - DECEMBER 27: Klay Thompson #11 of the Golden State Warriors reacts after they scored against the Charlotte Hornets during the fourth quarter of an NBA basketball game at Chase Center on December 27, 2022 in San Francisco,

SAN FRANCISCO, Calif., - Kevon Looney rushed his first try, not realizing he had a little time. Then he tipped in the game-winner as the final buzzer of the second overtime sounded. He got swarmed in celebration.

The durable big man who played every game last season and all of them so far in this one delivered a career-high 21 rebounds with two in the final 2 seconds, Klay Thompson scored a season-best 54 points, and the Golden State Warriors held off the Atlanta Hawks 143-141 on Monday night.

Looney laughed when asked if he had ever scored the game-winning basket — "not a walkoff game-winner."

"I rushed the first one I didn’t think I had that much time, but I saw I had more time so I took my time on the second one and I was able to make it," Looney said.

Trae Young tied the score on a floating layup with 8.2 seconds remaining before the Warriors’ final chance. Young made four crucial free throws late in the first OT and finished with 30 points and 14 assists.

Looney also had 14 points and five assists. Draymond Green made his only 3-point attempt of the game with 43.8 seconds left in the last OT and finished with 13 rebounds and 11 assists.

"He just made shot after shot and play after play, he was incredible," coach Steve Kerr said.

Thompson hit a go-ahead 3 with 18 seconds left in the first overtime after his tying 3 with 1:55 to go in the initial extra period.

Thompson recently began ignoring social media, slowing things down to be more patient and has found his form from back in 2019 before surgeries on his left knee and right Achilles that sidelined him more than 2 1/2 years.

He is nearing the first anniversary of his return to the court, on Jan. 9.

"It’s better than good, amazing," he said. "Those moments where you have the ball with the game on the line down the stretch and your teammates trust you, those are what you really live for as a competitor, as a basketball player. It was hard to see those at times during the rehab process."

Donte DiVincenzo corralled a crucial offensive rebound then knocked down a tying 3-pointer with 0.6 seconds remaining in regulation to send the game into OT after Thompson and Jordan Poole had each missed from long range the same sequence.

John Collins scored 21 of his 25 points after halftime and dished out 13 assists as the Hawks roared back after trailing by as many as 21 in the first half. Dejounte Murray also scored 25 to go with 10 rebounds and seven assists.

All five Atlanta starters scored in double figures and six players in all, including Bogdan Bogdanovic’s 21 off the bench.

De’Andre Hunter returned from a three-game absence with a sprained left ankle to scored 17 points for the Hawks, who lost their fourth straight. Atlanta rallied in the third to tie the game at 95 heading into the fourth.

Golden State is 17-2 at Chase Center and 5-0 on its current eight-game homestand that matches the longest in franchise history.

Jonathan Kuminga joined the injury report with a sprained right foot that swelled up after Friday’s game. He is using a walking boot.

Center James Wiseman sat out a second straight game after he rolled his left ankle during a 3-on-3 scrimmage following the morning shootaround Friday.

All-Star Andrew Wiggins missed his 14th game, dealing with an illness again that came on the heels of being sidelined by tightness in his right upper leg.

JaMychal Green is out of the league health and safety protocols but now dealing with an infection in his lower right leg.

Hawks: Atlanta shot 2 of 16 from deep in the first half to fall behind 70-53. ... C Clint Capela sat out for the seventh time in eight games with a bruised right calf. ... The Hawks are 0-3 on the road vs. the Western Conference.

Warriors: Veteran Andre Iguodala, yet to play in a game this season, scrimmaged with the G League squad earlier in the day at Chase Center.