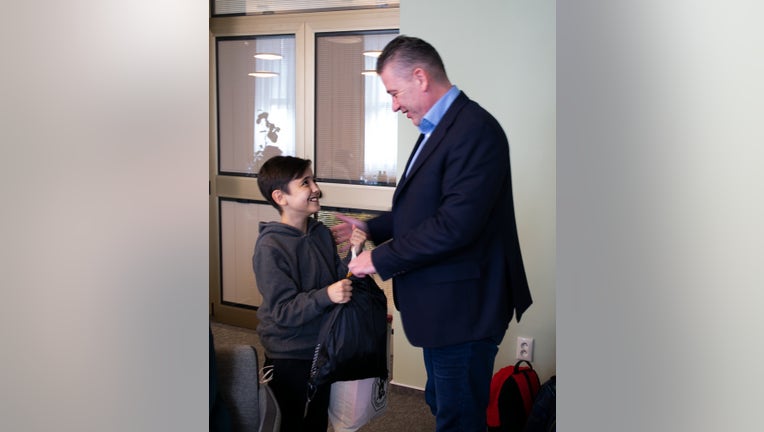 BRATISLAVA, Slovakia - An 11-year-old Ukrainian boy was being hailed "a real hero" after leaving his home and traveling more than 620 miles alone seeking safety in neighboring Slovakia.

In a Facebook post by the Slovak Embassy in the United Kingdom on Monday, officials said, "The boy came all alone with a plastic bag, passport and a telephone number written on his hand," as they described him as "THE BIGGEST HERO OF LAST NIGHT."

The child left his home in Zaporozhye in southeastern Ukraine to cross the country’s western border with Slovakia, according to officials.

His mother reportedly placed him on a train and sent him to make the journey by himself.

The Slovak Embassy said the mother, Yulia Pisetskaya, explained in a video message that she had to send her son alone because she was a widow and had additional children to care for. She also said she had to stay back to watch over her own mother.

"Next to my town is a nuclear power plant that the Russians are shooting at. I couldn’t leave my mother – she can’t move on her own," Pisetskaya was quoted as saying.

The boy's mother also expressed her deep gratitude to Slovakian officials and volunteers who helped her son cross the border. "I am very grateful that they saved the life of my child," she said. "In your small country, there are people with big hearts."

Officials said the number written on the boy’s hand and information on a piece of paper he carried allowed them to contact relatives in Slovakia who later came for him.

And despite the unfathomable and frightening journey the child had to make, what shined through was the heroic traits he demonstrated to the strangers who received him in a foreign land.

"He conquered everyone with his smile, fearlessness and determination of a real hero," a Slovak Interior Ministry representative said.

Slovakia’s interior minister, Roman Mikulec, noted that the child demonstrated strength and courage sometimes not even seen in adults, and he lamented over what the crisis was doing to families and other refugees like the boy, forced to leave everything they knew.

"I am really very sorry for him and all the other children and their families who have to flee their country because of what is happening in Ukraine," Mikulec said as he described the events he endured a story that captured the heart of all of Slovakia.

The latest figures from the UN Refugee Agency (UNHCR) showed more than 2 million Ukrainians have fled their country since the Russian invasion on Feb. 24. The agency estimated the crisis could lead to some 4 million Ukrainians being displaced.