The fire department had earlier said on social media that rescues were in progress. The fire on the third floor of a four-story apartment building engulfed two floors of the building, located at 400 Upper Terrace.

The first alert about the fire was posted to Twitter at 8:45 p.m. A fire department spokesperson said the fire was contained at around 9:45 p.m. By 11 p.m. the fire was under control and flames were completely out.

The fire spread to the fourth floor and the roof, SFFD said. Officials said the wind was a contributing factor in the fire's rapid spread within the building.

When the wind picked up again around 4 a.m. Tuesday morning, the fire was reignited. But crews came back to the scene to quickly put it out again.

According to the SFFD, Monday night firefighters rescued two individuals and "multiple families" from the building, with no injuries reported. However, "numerous" family pets are still not accounted for, the spokesperson said.

40 to 50 people have been displaced, SFFD said. The Red Cross has been notified.

2 people rescued in San Francisco apartment fire that has been contained, no injuries

Live report from the scene of a two-alarm apartment fire that displaced as many as 50 residents on Upper Terrace in the Corona Heights neighborhood on Monday. There were no injuries, but two people had to be rescued by San Francisco firefighters.

Fire Lt. Jonathan Baxter said the two people who had to be rescued climbed to the balcony because they could not access the hallway. Baxter said it was good of them to have a plan in place to escape.

The public is asked to avoid the area for several hours. There is no word on what started the fire.

Crews will remain to remove any hot spots and allow access to the fire investigator. 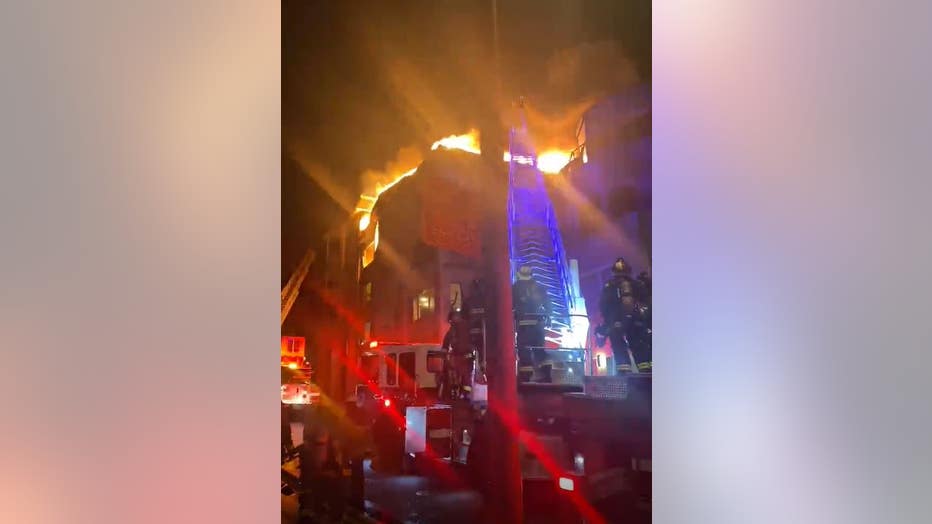