The fire began around 12:30 a.m. Saturday, and a nearby homeless encampment fire could be to blame for the warehouse inferno.

OAKLAND, Calif. - Investigators are looking into whether a homeless encampment may have sparked a 3-alarm warehouse fire in East Oakland early Saturday morning.

The fire broke out in a building on 45th Avenue and East 12th Street, in an industrial part of the city.

The first fire crews arriving on scene reported that the warehouse was engulfed in flames, and asked more assistance.

Firefighters had to take a defensive approach, due to the size and intensity of the fire.

The heat from the warehouse fire caused nearby buildings to spark.

But crews were able to quickly put out the flames, said Batt. Chief James Bowron.

The main fire was contained at about 1:34 a.m., and it was brought under control some 13-minutes later.

The fire downed several electrical lines, and burned 3 to 4 power poles and a number of transformers, causing widespread outages in the neighborhood, said Bowron.

Firefighters will be working with utility crews to restore electrical service to other PG&E customers in the area.

There were no reports of injuries to firefighters.

While the cause of the fire is officially under investigation, Bowron said there was talk that an encampment fire possibly extended into the main building. 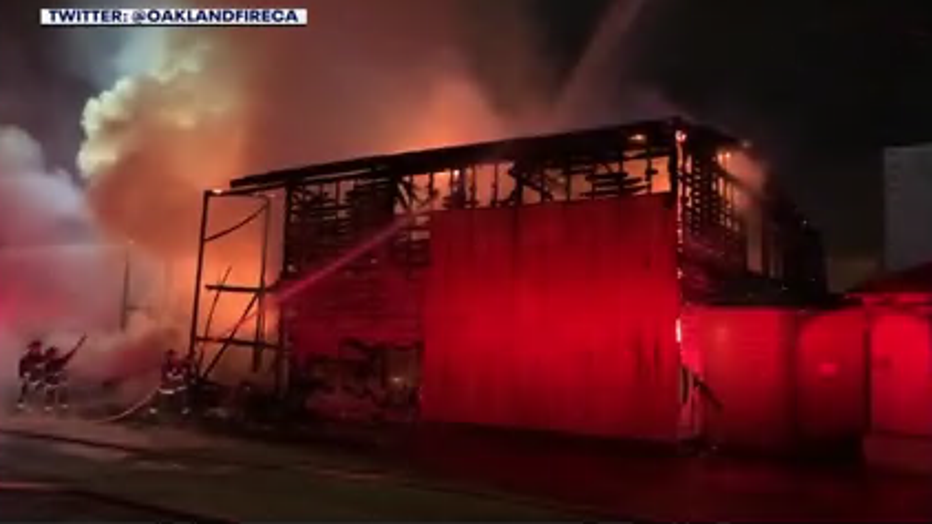