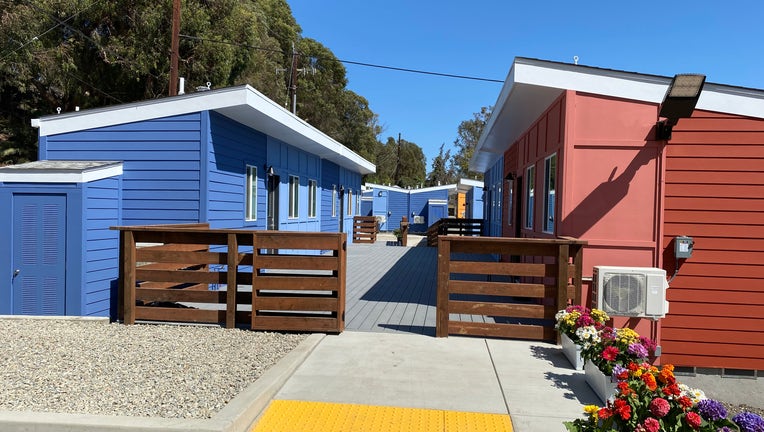 The village is located at the Fairmont Navigation Center. And the program is being managed by Building Opportunities for Self-Sufficiency, or BOSS.

The tiny homes will give unsheltered people access to small units with a bed, kitchenette, restroom and dining area.

In addition, those granted a tiny home will also have access to county resources including long-term housing help, social services, medical, behavioral health, and substance use services, according to the Alameda County Public Health Department.

In addition, 15 of these units will be prioritized for medical respite for those who are too sick or frail to recover from a physical illness or injury on the street but do not require a hospital setting.

"We believe housing is health care and interim housing can be instrumental in healing and assisting people in their transition into permanent housing," said Colleen Chawla, director of Alameda County Health Care Services Agency.

More than 8,000 people experience homelessness in Alameda County each night, with 79% of this population experiencing unsheltered homelessness on the street, in tents or vehicles, county officials said.

Skyrocketing rents over the last decade have contributed to homelessness, as more than 80% of those who are currently experiencing homelessness in Alameda County lived here before losing their home, officials said.

The concept of tiny homes has taken off in recent years as a way to shelter homeless people in relatively affordable units.

Most efforts are sanctioned by local cities.

However, in San Jose last week, a group of volunteers began building tiny shelters for the homeless, hoping they don't get caught. They're doing it in an undisclosed location, without permits, hoping the benefit outweighs the cost.

The volunteers from groups such as, Feed the Block, Hero Tent and Black Outreach, said they felt it was imperative to take housing for the homeless into their own hands because the city of San Jose simply isn't doing enough.

"That is not just a feeling, but I feel like it is evident by the many hundreds of unhoused people that are around here," says Yusuf Labib with Black Outreach.