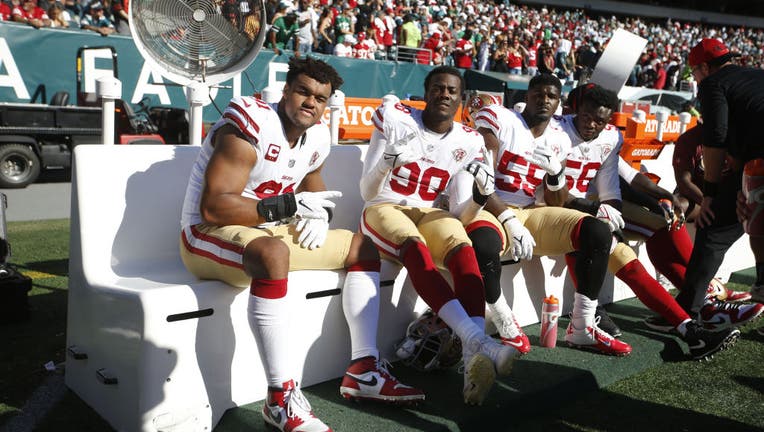 PHILADELPHIA, PA - SEPTEMBER 19: Arik Armstead #91, Arden Key #98, Dee Ford #55 and Samson Ebukam #56 of the San Francisco 49ers on the bench during the game against the Philadelphia Eagles at Lincoln Financial Field on September 19, 2021 in Philadel

SANTA CLARA, Calif. - Staying on the road between East Coast games has been a successful formula for the San Francisco 49ers under coach Kyle Shanahan.

The problem has been how they played once they got back home. Shanahan and the Niners are looking to change that pattern when they host the Green Bay Packers on Sunday night after opening the season with road wins at Detroit and Philadelphia.

This is the fourth time under Shanahan that the team stayed East between road games and the Niners (2-0) have won the back end of those trips every time. But they've been flat once they returned home, surviving a five-turnover performance to beat Pittsburgh in 2019 and then losing to Atlanta later that year and the Eagles last season.

"We talked about it, which I think is the most important thing, being aware of it because I don’t think we did realize that in the first year," Shanahan said. "I don’t really chalk it up to that, but after having that feeling three (times) in a row of it, I do think that there is something to be said on it. So, you talk about it so guys are aware."

Shanahan changed the approach heading into this game against the Packers (1-1), cutting the Monday schedule in half and having a light practice Wednesday.

Green Bay also has to make some adjustments coming off a Monday night game before the long flight West.

The Packers have lost four of their past five games in California but quarterback Aaron Rodgers is always happen to return, having grown up cheering for the Niners as a kid in Chico.

"I have so many great memories watching those great teams from the late 80s and early 90s — before many of my teammates were born — and still have a lot of love and affection for the area," he said. "Went to college there, still keep in touch with many folks from Cal that I got to meet or play with, and that area will always be special to me for sure."

The Packers are making their fourth trip to Levi's Stadium in less than two years. They lost in the regular season in November 2019 and then again two months later in the playoffs in what was the last meaningful game with fans at San Francisco.

Green Bay won the matchup last November in the Niners' last home game before they got relocated to Arizona for the final month because of COVID-19 protocols.

The Packers already are playing without injured All-Pro left tackle David Bakhtiari, who tore his anterior cruciate ligament Dec. 31. They now face the possibility of missing Elgton Jenkins, the Pro Bowl guard who has been filling in for Bakhtiari at left tackle.

The 49ers' passing game has revolved around receiver Deebo Samuel with defenses focusing on tight end George Kittle and Brandon Aiyuk having a lesser role as he works his way back from a hamstring injury in camp. Samuel leads the NFL with 282 yards receiving this season on 15 catches. Samuel has been targeted on 36.4% of passes, second highest in the NFL to Cooper Kupp of the Rams.

Packers receiver Marquez Valdes-Scantling drew plenty of praise for his training camp performance and seemed on the verge of a breakthrough season, but he has only three catches for 17 yards this far.

Packers quarterback Aaron Rodgers blamed himself after Monday’s game for failing to hit Valdes-Scantling on some deep routes.

Valdes-Scantling had a two-touchdown game at San Francisco last season.

When reports surfaced before the draft that Rodgers might be traded, Shanahan didn't really believe it, but still called Packers coach Matt LaFleur just to check. He quickly got the answer he expected and the Niners went on to take Trey Lance with the third pick in the draft.

"I thought it’d be a quick no," he said. "I think everyone knew what was going on at that time that it didn’t seem like it was worth the call, but I know how we would’ve felt if it was going to happen and we didn’t call. So, you call, you get a quick answer which what was what you’re expecting and then you move on."