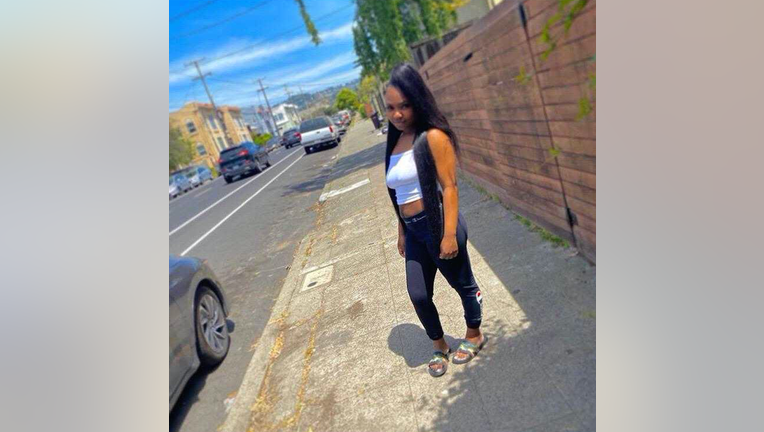 An undated photo of Sereinat’e Henderson. Henderson, 19, was killed October 21, 2020 in a drive-by shooting in Berkeley.

BERKELEY, Calif. - The killing of a pregnant mother in Berkeley remains unsolved, and authorities are now offering a $50,000 reward for information leading to an arrest and conviction in the case.

Sereinat’e Henderson, 19, was shot and killed while driving in her car with her family Wednesday night around 7 p.m.

$50K reward offered in killing of pregnant mom in Berkeley

The killing of a pregnant mother in Berkeley remains unsolved, and authorities are now offering a $50,000 reward for information leading to an arrest and conviction in the case.&nbsp;

Family members say they never imagined they could suffer a loss this way and see Sereinat'e Henderson die in front of her family.

Her loved ones have set up a memorial for Sereinat'e on the corner of Prince Street at Ellis in Berkeley. They are mourning the sudden death of the pregnant single mother

She was shot in her car when she pulled up to a stop sign.

She says she was in the front passenger seat when another car pulled up next to her daughter and fired multiple shots into her black Honda.

Wyrick says one bullet struck her daughter in the head.

"The bullets were coming. I didn't know where they were coming from, so I'm trying to grab her," says Wyrick, "I have to watch my baby die in front of me. She's not saying anything. She's just slumped."

In the back seat was Sereinat'e's 10-month-old son and her 14-year-old brother.

"He grabbed the baby and put the baby on the floor and get over the baby and just get down," says Wyrick. She says the family was on their way home from getting dinner when the attack happened.

Police say it appears the shooting was targeted.

"At this point, we don't have a motive for this case that we can share," says Officer Byron White with Berkely Police

Family members say they don't know why anyone would want to hurt her.

The loss painful especially when Sereinat'e's baby calls out for his mother.

Sereinat’e was a hair stylist at a salon called Braid Bar. The owner shared with me videos of the young woman being honored for her work and her drive: a 4'11" powerhouse known for her outspokenness.

"They took an innocent person's life, a mother. They need to be prosecuted. Bring them to justice," says Small.

Sereinat'e's mother says her daughter was two and a half months pregnant and looked forward to having her second child.

Now, the family is planning her funeral.