During his Congressional address, President Biden highlighted the conviction of George Floyd's murderer ad how Americans need to come together to root out system racism and bend the moral arc towards justice.

COLUMBUS, Ohio - Ohio’s capital city will pay a $10 million settlement for the family of Andre Hill, a Black man who was fatally shot by a white Columbus police officer in December as he emerged from a garage holding a cellphone, the Columbus city attorney announced Friday.

It's the largest such settlement in city history.

Hill, 47, was fatally shot by officer Adam Coy on Dec. 22 as Hill emerged from a garage holding up a cellphone. Coy was fired and has pleaded not guilty to murder and reckless homicide charges.

"No amount of money will ever bring Andre Hill back to his family, but we believe this is an important and necessary step in the right direction," Columbus City Attorney Zach Klein said in a statement.

As part of the settlement, a gym frequented by Hill will be renamed the Andre Hill Gymnasium.

Lawyers representing Hill's family praised the settlement and the gym renaming, saying in a statement: "Now all those involved can begin to heal." 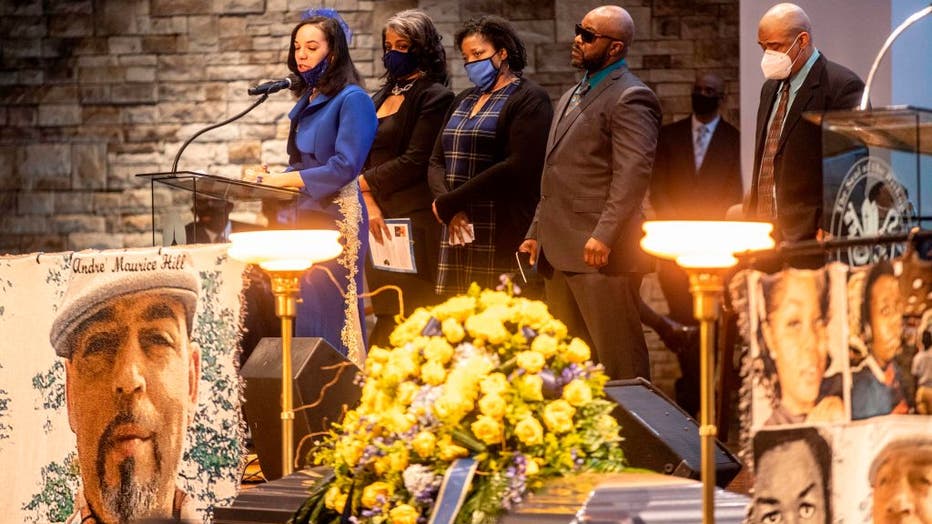 Karissa Hill, Andre Hill’s daughter, speaks during the memorial service for her dad inside the First Church of God sanctuary in Columbus, Ohio on Jan. 5, 2021. (Photo by STEPHEN ZENNER/AFP via Getty Images)

Hill was visiting a family friend when he was shot. Coy and another officer had responded to a neighbor's nonemergency complaint about someone stopping and starting a car outside.

"He was bringing me Christmas money. He didn’t do anything," a woman inside the house shouted at police afterward.

The shooting was recorded by Coy's body camera, but without sound because Coy hadn't activated the camera on what started as a non-emergency call. A 60-second look-back function on the camera captured the shooting.

Coy, who had a long history of complaints from citizens, was fired Dec. 28 for failing to activate his body camera and for not providing medical aid to Hill. He was initially charged for dereliction of duty for not activating the camera, but those charges were dropped.

Coy’s attorneys successfully argued the officer didn’t violate any duty because he was on a non-emergency run that didn’t require the cameras to be activated.

Beyond an internal police investigation, the Ohio attorney general, the U.S. attorney for central Ohio and the FBI have begun their own probes into the shooting.

The city is narrowing a list of finalists for the new chief, with an announcement expected by month’s end. All candidates are external, with Ginther saying an outsider was needed to enact broad cultural changes in the department.

The department is under scrutiny for recent fatal shootings of Black people by white officers, including the death of 16-year-old Ma’Khia Bryant on April 20. And earlier this month, a federal judge ordered the city to alter the way it responds to mass protests, saying officers ran "amok" during protests over racial injustice and police brutality last summer.

Ginther and other officials invited the Justice Department last month to review the agency for deficiencies and racial disparities in several areas.