ELIZABETH CITY, N.C. (AP) - Lawyers for relatives of Andrew Brown Jr., a Black man fatally shot by deputies, said Tuesday that body camera videos show that he didn’t strike them with his car before they opened fire, contradicting a local prosecutor.

Chance Lynch, a lawyer who viewed the footage in private with Brown's family, said Brown was sitting in his stationary car with his hands on the wheel when the first of numerous shots was fired. Family members had previously seen about 20 seconds of the video but were shown approximately 18 minutes on Tuesday under a judge’s order.

The family’s lawyers say the footage contradicts statements by the local district attorney, who said in court that deputies didn’t start firing until after Brown’s vehicle struck them twice. Lynch's description aligns with what another family attorney said after seeing the shorter clip.

"We did not see any actions on Mr. Brown’s part where he made contact with them or tried to go in their direction," Lynch told reporters. In fact, he did just the opposite. While there was a group of law enforcement that were in front of him, he went the opposite direction."

He described the shooting as "unconstitutional" and "unjustifiable."

Brown was outside his house in Elizabeth City when he was shot on April 21. Deputies were serving a drug-related search warrant at the time.

District Attorney Andrew Womble said during a court hearing that Brown’s car made "contact" with law enforcement officers twice before the shooting began.

Judge Jeffery Foster ruled that the family can view less than 20 minutes of the nearly two hours of video that was recorded. 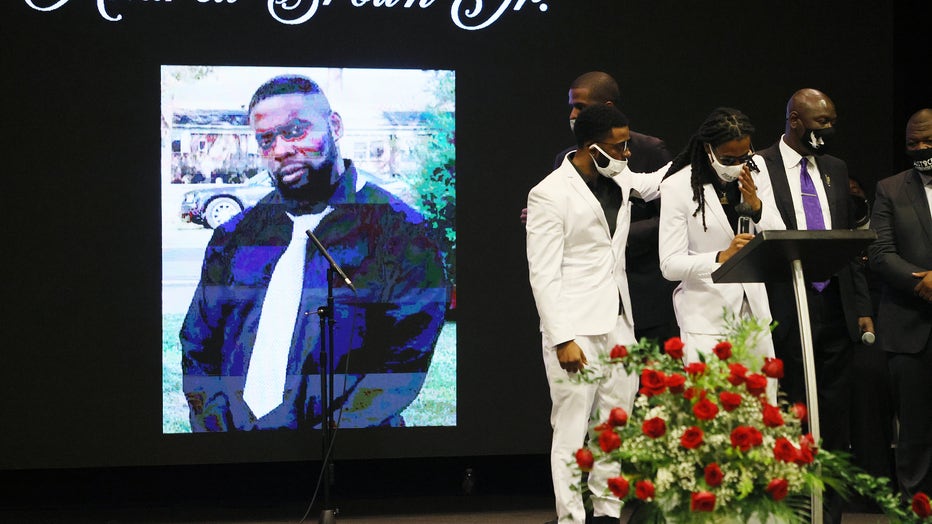 ELIZABETH CITY, NORTH CAROLINA - MAY 03: Jha'rod Ferebee (L) and Khalil Ferebee speak during the funeral for their father Andrew Brown Jr. at the Fountain of Life church on May 03, 2021 in Elizabeth City, North Carolina. Mr. Brown was shot to death b

Foster has said that he would not publicly release the recordings, because doing so could jeopardize the ongoing investigation into Brown’s death or threaten the safety of people they show. Foster said the video must remain out of public view for at least 30 days, but he would consider releasing it after that point if investigations are complete.

Brown’s shooting has drawn national attention to the small, majority Black city in the state’s rural northeastern corner. And many city residents — as well as nationally prominent civil rights leaders and attorneys — are demanding the public release of the complete recordings.