Historians estimate that up to 1.5 million Armenians were killed around World War I, and many scholars see it as the 20th century's first genocide.

WASHINGTON - The massacre of up to 1.5 million Armenians by the Ottoman Empire during World War I is observed each year on April 24. The events are widely regarded as the first genocide of the 20th century.

Armenians have long pushed for the deaths to be recognized as genocide, a term that Turkey rejects.

This year, as many commemorate the annual Armenian Genocide Remembrance Day on Saturday, President Joe Biden is preparing to formally acknowledge that the systematic killing and deportation of hundreds of thousands of Armenians in modern-day Turkey was, in fact, an act of "genocide," according to the Associated Press, citing anonymous U.S. officials.

The anticipated move, something Biden had pledged to do as a candidate, would make him the first U.S. president to use the term and could further complicate an already tense relationship with Turkish leader Recep Tayyip Erdogan. 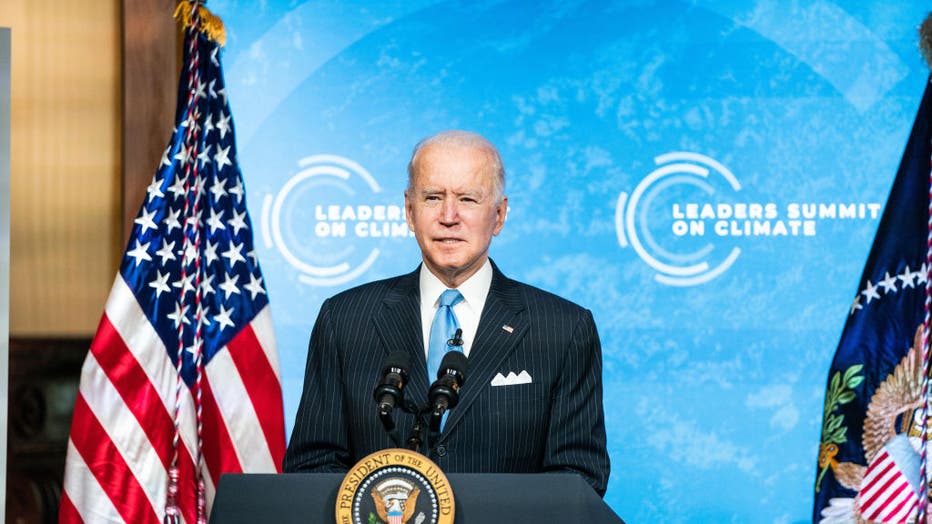 President Joe Biden delivers remarks during day 2 of the virtual Leaders Summit on Climate at the East Room of the White House April 23, 2021 in Washington, DC. (Photo by Anna Moneymaker-Pool/Getty Images)

Here is background on what happened more than a century ago, and what it would mean for Biden to formally call it genocide.

What happened during the Armenian Genocide?

Historians estimate that, in the last days of the Ottoman Empire, up to 1.5 million Armenians were killed by Ottoman Turks between 1915 and 1923.

The Armenian people were subjected to deportation, expropriation, abduction, torture, massacre and starvation, according to the Armenian National Institute.

"There were an estimated two million Armenians living in the Ottoman Empire on the eve of W.W.I. Well over a million were deported in 1915. Hundreds of thousands were butchered outright. Many others died of starvation, exhaustion, and epidemics which ravaged the concentration camps," the institute states on its website.

The International Associated of Genocide Scholars calls the events by the Young Turk government "a systematic, well-planned and organized genocide of its Armenian citizens – an unarmed Christian minority population."

The IAGS also states that documentation of the Armenian genocide "abundant and overwhelming," saying it was regularly reported in newspapers across the U.S. and Europe.

Armenians have long pushed for the deaths to be recognized as genocide.

Turkey’s government has conceded that many died in that era, but the country has rejected the term "genocide."

The 1948 United Nations convention on genocide defines it in part as crimes "committed with intent to destroy, in whole or in part, a national, ethnical, racial or religious group."

Turkey maintains that the death toll is inflated and the deaths resulted from civil unrest during the Ottoman Empire’s collapse.

The country’s denial of genocide is well-established Turkish society, with school textbooks calling the genocide a lie and declaring the actions by the Ottoman Turks as "necessary measures" against Armenian separatism, according to the New York Times. Writers who have used the term genocide have been prosecuted under Section 301 of Turkey’s penal code, which bans "denigrating Turkishness," the newspaper reports.

Why have U.S. presidents not called the Armenian killings genocide?

The annual remembrance day has been often recognized by U.S. presidents with a proclamation. But Biden's predecessors have avoided using "genocide" while specifically commemorating the dark moment in history.

In 1981, President Ronald Reagan referred to the "genocide of the Armenians" in a statement commemorating the liberation of the Nazi death camps.

American presidents have generally avoided the term out of concern about damaging relations with Turkey.

Ties between Washington, D.C. and Turkey’s capital of Ankara — which once considered each other strategic partners — have steadily deteriorated in recent years over differences on Syria, Turkey’s cooperation with Russia and more recently on Turkish naval interventions in the eastern Mediterranean, which U.S. officials have described as destabilizing.

What is different now?

Biden pledged as a candidate to recognize the World War I-era killings and deportations of hundreds of thousands of Armenians in modern-day Turkey. In a speech on April 24, 2020, he used the term "Armenian genocide" and pledged to "never forget or remain silent about this horrific and systematic campaign of extermination."

In 2019, both the Senate and the House passed a resolution formally recognizing the Armenian killings as a genocide.

Many lawmakers and Armenian American activists have lobbied Biden to make the announcement on or before Armenian Genocide Remembrance Day.

On Wednesday, a bipartisan group of more than 100 House members also signed a letter to Biden calling on him to become the first U.S. president to formally recognize the atrocities as genocide. Democratic Rep. Adam Schiff of California spearheaded the letter.

"If we aren’t going to recognize a genocide that happened a century ago, what does that say about our willingness to stand up and confront a genocide happening today?" Schiff told FOX 11 Los Angeles.

Officials said Biden could still change his mind, but wanted to speak with Erdogan before formally recognizing the events of 1915 to 1923 as genocide, according to the Associated Press.

Salpi Ghazarian, director of the University of Southern California’s Institute of Armenian Studies, said the recognition of genocide would resonate beyond Armenia as Biden insists that respect for human rights will be a central principle in his foreign policy.

"Within the United States and outside the United States, the American commitment to basic human values has been questioned now for decades," she said. "It is very important for people in the world to continue to have the hope and the faith that America’s aspirational values are still relevant, and that we can in fact to do several things at once. We can in fact carry on trade and other relations with countries while also calling out the fact that a government cannot get away with murdering its own citizens."

The potential recognition also comes months after a war occurred between Armenia and neighboring country Azerbaijan, who was supported by Turkey.

Thousands of people were killed when Azerbaijan began fighting on in September over the region of Nagorno-Karabakh, also known as Artsakh. Several people living in Artsakh were displaced and several historical and cultural Armenian structures, including churches, were destroyed, FOX 11 Los Angeles reported.

Several Armenian POWs are currently being held captive by Azerbaijan. The war ended in early November, but over a hundred POWs have still not returned to Armenia, the station reported.

How has Turkey responded this week?'

Turkish Foreign Minister Mevlut Cavusoglu earlier this week insisted Turkey wasn’t concerned by any decision that Biden might make, but also suggested that such a move would be met with a harsh reaction.

"If the United States wants our relations to get worse, it’s up to them," he said in an interview with Turkey’s HaberTurk news channel.