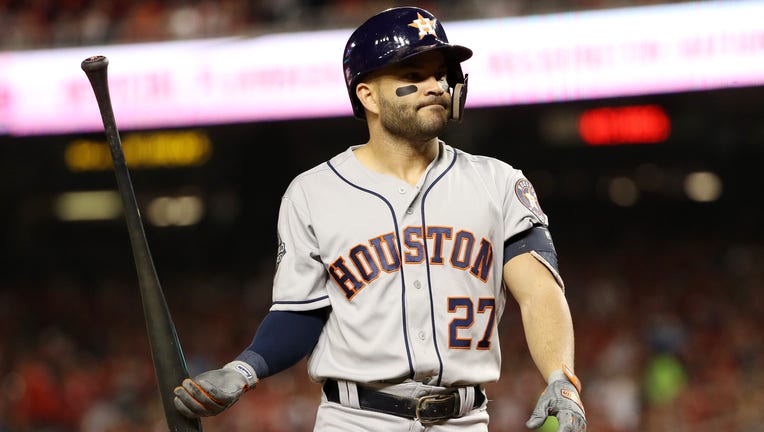 WASHINGTON, DC - OCTOBER 25: Jose Altuve #27 of the Houston Astros reacts against the Washington Nationals during the fifth inning in Game Three of the 2019 World Series at Nationals Park on October 25, 2019 in Washington, DC. (Photo by Patrick Smith

WASHINGTON - The Houston Astros face the Washington Nationals for Game 4 of the World Series Saturday night.

Houston Astros look to even the World Series at two games apiece after beating the Nationals 4-1 Friday night in Washington. The re-energized Astros ended Washington's eight-game winning streak, which was tied for the longest in a single postseason. Lefty Patrick Corbin starts for Washington tonight against right-hander José Urquidy.

Michael Brantley hit a pair of RBI singles and Robinson Chirinos slammed a solo homer as the Houston Astros knocked off the Washington Nationals, 4-1 to get within two games to one in the World Series. The Astros’ bullpen tossed two-hit ball after starter Zack Greinke was reached for one run and seven hits over 4 2/3 innings. Anibal Sanchez allowed four runs and 10 hits over 5 1/3 innings.

BOTTOM LINE: Corbin and Nationals look to extend lead over Astros in Game 4 of World Series, while the Astros hope to tie things up.

The Nationals are 50-31 on their home turf. Washington has a team batting average of .255 this postseason, Anthony Rendon has lead them with an average of .311, including seven extra base hits and nine RBIs.

The Astros have gone 47-34 away from home. Houston has a team on-base percentage of .297 this postseason, Jose Altuve leads them with an OBP of .413, including 11 extra base hits and eight RBIs.

REGULAR SEASON TOP PERFORMERS: Anthony Rendon lead the Nationals with 126 RBIs and a batting average of .319.

Alex Bregman leads the Astros with 41 home runs and a .592 slugging percentage.