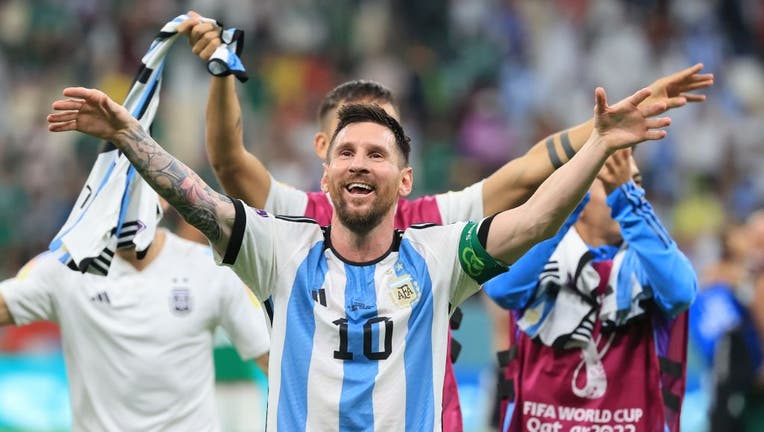 Lionel Messi (10) of Argentina celebrates with his teammates after winning the FIFA World Cup Qatar 2022 Group C match between Argentina and Mexico at Lusail Stadium on November 26, 2022 in Lusail City, Qatar. (Photo by Mohammed Dabbous/Anadolu Agenc

Saturday's World Cup games brought major wins for several countries. Defending champions France advanced to the knockout round, and Poland forward Robert Lewandowski, who's considered one of the best in the league, finally scored a goal at the World Cup.

Lionel Messi came up with another crucial goal for Argentina in a 2-0 win over Mexico on Saturday that ignited the team’s World Cup chances.

And Mitchell Duke gave Australia the lead midway through the first half with a header and Australia went on to register its first win at soccer’s biggest event since a victory over Serbia back in 2010.

Kylian Mbappe scored two goals and put defending champion France into the knockout stage of the World Cup with a 2-1 win over Denmark.

Mbappe put France ahead in the 61st minute and scored the winner in the 86th with his right thigh as Les Bleus became the first team to advance to the next round.

Denmark dfender Andreas Christensen equalized for his team with a header in the 68th. Mbappe has scored three goals so far in Qatar.

He scored four goals when France won the World Cup four years ago.

Messi took a touch from Angel Di Maria’s pass across the face of the area and drove a low shot from 25 meters (yards) into the bottom corner in the 64th minute.

He ran toward Argentina’s fans with his arms outstretched arms before getting mobbed by his jubilant teammates. He looked emotional as he grabbed and shook his jersey, then blew a kiss to the crowd before whirling his arms.

Argentina bounced back from a shocking 2-1 loss to Saudi Arabia in its opening match. The team is in second place in Group C ahead of its last match against Poland on Wednesday and might need to win it to advance.

The 35-year-old Messi is likely playing in his last World Cup, which is the only major title missing from his collection.

It was an eighth World Cup goal for Messi — the same number scored in the tournament by rival Cristiano Ronaldo and also Diego Maradona, the Argentina great with whom he is so often compared.

For some, Messi needs to win the World Cup to join the ranks of Pele and Maradona as soccer’s greatest ever players. Thanks to this win, it could still happen.

Until his goal, Messi was enduring a frustrating match, finding himself with two defenders on him each time he received the ball.

Argentina coach Lionel Scaloni made five changes from the Saudi Arabia game in a bid to inject some more energy into the team but they initially made little difference.

The momentum of the game changed completely after Messi's goal, his 93rd in internationals and his second of the tournament after a penalty against Saudi Arabia. 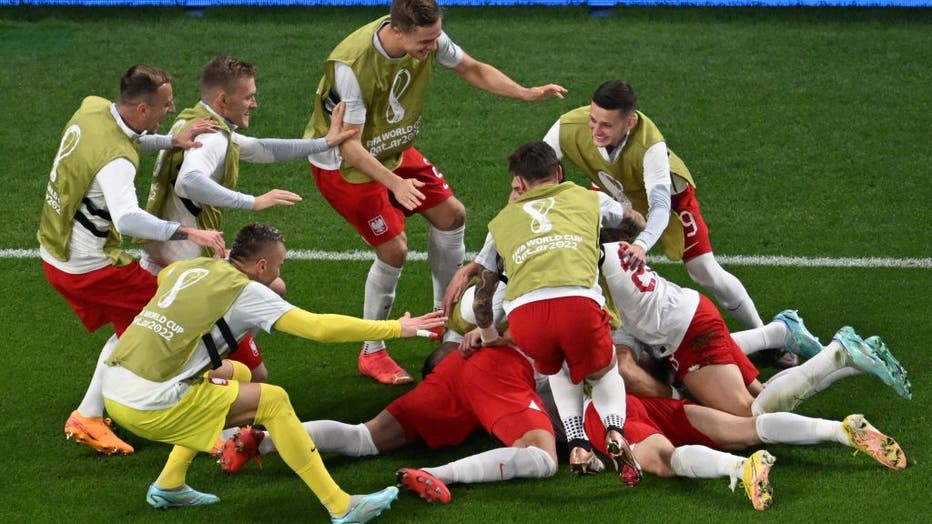 Robert Lewandowski at last scored a goal in a World Cup match on Saturday, helping Poland beat Saudi Arabia 2-0 and boosting his team’s chances of reaching the knockout stages.

Lewandowski shed tears after scoring in the 82nd minute. He raced toward the corner with his arms outstretched, then stayed slumped on the field as teammates rushed to congratulate him. He got up, rubbed his face, and blew a kiss to the crowd.

"Today everything I had inside, the dreams, the importance of the occasion, all those dreams from my childhood came through," Lewandowski said. "It was so significant."

One of the best forwards in the world, Lewandowski’s barren streak at the World Cup was somewhat puzzling. Now, in his fifth match at the tournament, it’s over.

"I always wanted to score at the World Cup and this dream came true," said Lewandowski, who had a penalty saved in Poland's 0-0 draw with Mexico on Tuesday. "It’s not easy, because we didn’t have many opportunities in the first match and I missed that penalty."

Against Saudi Arabia, Lewandowski also set up the opener in the 40th minute when he kept the ball in play after goalkeeper Mohammed Al-Owais’ initial block, then laid it back for Piotr Zielinski to knock in.

Lewandowski, who had no involvement in any goals in his first four World Cup games, also hit the post, and Al-Owais later denied the Barcelona player from scoring another goal toward the end of the match.

It was the one that went in that brought tears to the 34-year-old striker's eyes.

"The older I get, the more emotional I get," Lewandowski said, referring to his reaction after finally scoring. "I’m aware that when it comes to the World Cup, that this might be my last World Cup. And I wanted to underline that I played at World Cups and I scored."

"I know how deeply he lived the last match," Michniewicz said. "I’m very sorry he wasn’t lucky enough, he hit the post and the goalkeeper made a save. He could have had a hat trick today."

Poland was scrambling for long periods at the Education City Stadium as the Saudi team was pushed forward by enthusiastic fans in what seemed like a home game. The frustration was clear on Lewandowski’s face as Poland's yellow cards mounted.

Saudi Arabia had a chance to equalize at the end of the first half but Poland goalkeeper Wojciech Szczesny saved Salem Al-Dawsari’s penalty kick. He then blocked Mohammed Al-Burayk’s shot from the rebound.

Poland will next face Argentina, while Saudi Arabia will meet Mexico in their last Group C games.

RELATED: How does USA advance at World Cup? We track all Group B scenarios 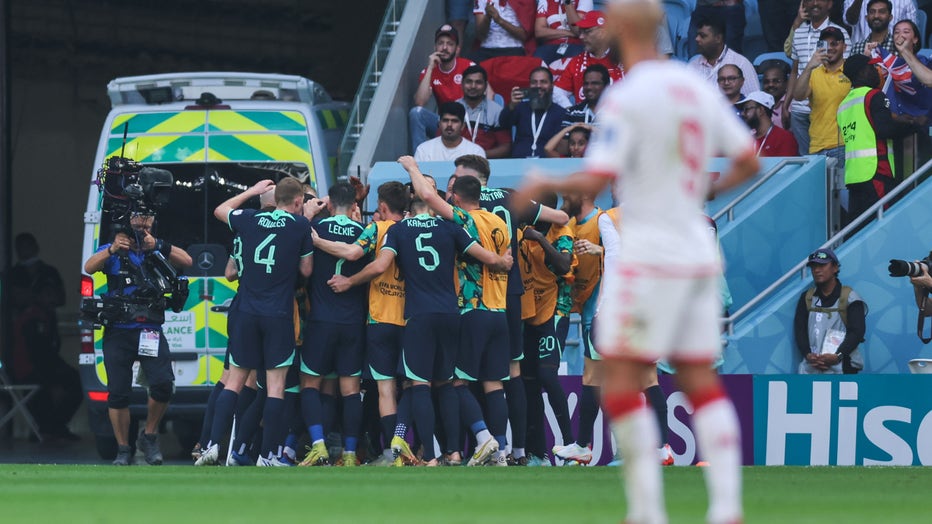 Mitchell Duke celebrated scoring Australia's winning goal by forming a "J" with his fingers in a tribute to his son Jaxson, who was in the stands.

Coach Graham Arnold dragged injured winger Martin Boyle — on crutches — into the celebratory huddle as fans sang merrily along to Men at Work’s "Down Under," blaring over the stadium speakers after the final whistle.

Later, Arnold was wiping away tears.

It was an emotion-filled day for Australia, which beat Tunisia 1-0 Saturday at the World Cup.

Duke gave Australia the lead midway through the first half with a header and Australia went on to register its first win at soccer’s biggest event since a victory over Serbia back in 2010.

"I actually was messaging some of my family, saying that I was going to score today, and I told my son that I was going to be able to share this moment with him and get that celebration," Duke said. "I haven’t seen it yet but apparently he did it back to me from the stadium, which was a really special moment that I’m going to treasure for the rest of my life."

It was Australia’s first shutout at the World Cup since its tournament debut in 1974 and it means the Socceroos still have a chance to qualify for the round of 16, despite losing to defending champion France 4-1 in their opening match.

Boyle was injured a few weeks before the tournament and Arnold explained why he moved him into the team’s staff as "vibe manager" in Qatar.

LINK: Get updates on this story and more on the World Cup at foxsports.com.

"To keep all the guys up, because he’s one of the most fantastic blokes you’ll ever meet," Arnold said. "There was no way he wanted to go home, and no way I wanted to send him home. He deserves it more than anybody for what he did in the qualifying campaign."

In the final round of group games on Wednesday, Tunisia will play France and Australia will meet Denmark. 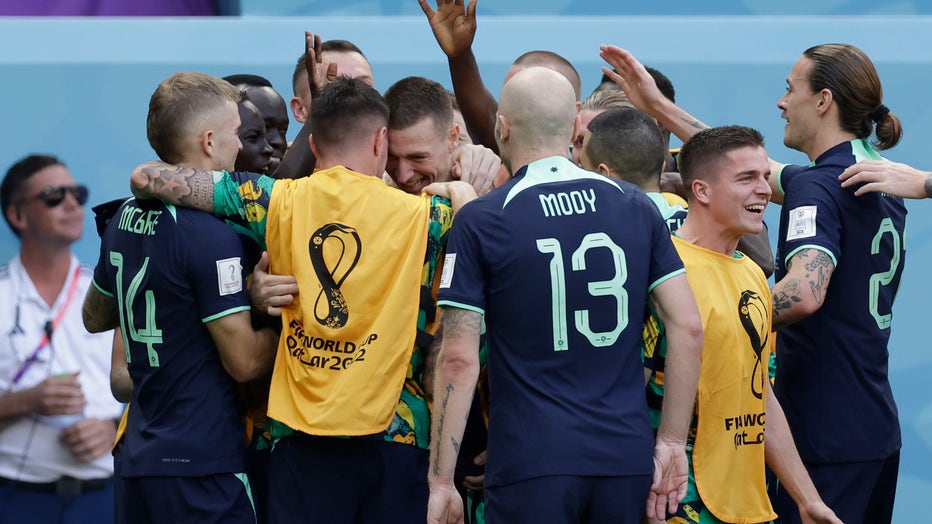 After a scrappy start from both sides, Australia went ahead with a play out of the back from its goalkeeper. Duke collected the goalkeeper’s pass near the middle of the field and made a quick touch to set Craig Goodwin down the left flank. Duke then sprinted forward to nod Goodwin’s deflected cross into the far corner with his back to the goal.

The score quieted the large contingent of red-clad Tunisia fans among the crowd of 41,823 inside Al Janoub Stadium, and sent the small pockets of Australian supporters dressed in yellow into delirium.

Tunisia impressed when it held European Championship semifinalist Denmark to a 0-0 draw in its opener but only occasionally threatened against Australia until the Aussies sat back and defended toward the end.

"The first half we were not efficient," Tunisia coach Jalel Kadri. "The second half we did better but we couldn’t convert our chances."

Australia had also gotten off to an early 1-0 lead over France in its opener but then was outplayed in a loss which it blamed on a series of defensive errors.

There were fewer errors this time, and some timely interventions, too — none bigger than a last-gasp sliding clearance from center back Harry Souttar to block Mohamed Dräger’s dangerous shot shortly before halftime.

Tunisia is still seeking to advance from the group stage for the first time in its sixth World Cup appearance but now needs to beat France.

"This edition of the World Cup has had surprises for everyone, the larger squads have been defeated," Kadri said. "We still have one more match to go and we’ll play our hearts out."

During the second half, Tunisia fans held aloft a large Palestinian flag with the words "Free Palestine" printed on it.

Read more from the World Cup:

LINK: Get the latest updates on this story at FOXSports.com.