BRENTWOOD, Calif. - Sizzling temperatures set in across the Bay Area Friday and many sought relief, while also enjoying some fun in the sun.

By noon, it was already 97 degrees in Brentwood. Friday's highest temperature was forecast to be 104 degrees in eastern Contra Costa County. And by 3 p.m. it was 101 degrees and climbing.

But hot temperatures weren't a problem for some people.

"Hot is good. I'd rather be hot than cold. I'm originally from back east; got rid of my shovels," said ice cream shop customer Howard Wong.

At the Sip and Scoop Ice Cream shop in Brentwood, both the cold treats and air conditioning kept the shop busy all day.

"When we have the A/C working it's definitely a good spot to be. We have ice cream, a coffee shop, a restaurant, just to get the kids out of the house," said owner Vicky Little.

Parents took advantage of the heat for their kids.

"It's beautiful. It's nice. It's clean. The splash pad is amazing for kids just to come in and, you know, cool off. My daughter loves it here. It's pretty much like our backyard," said mom Mae Bounprakob.

"My wife and I are just driving back from a trip from Yosemite, and we had stopped to get the little one refreshed, and he's getting quite refreshed," said dad Sean Jubb. 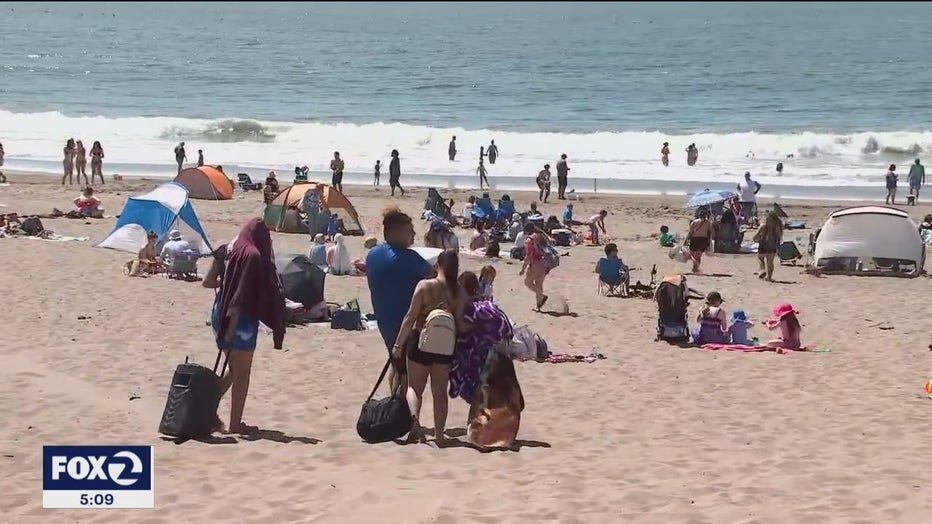 It wasn't just about beating the heat. It was something much more important and deeper.

"You know, we've been in COVID captivity for quite a few years now, and it's nice to have this open back up again, so the kids can have some social with each other and a good way to be bathed with the water," said mom, Danielle Gross.

"My little one is four so, with the pandemic and coming out of that whole wave of what we've been through to be able to run around without a mask and socialize and cool down, it's beautiful to see these smiles again," said another mom Amira Cesar.

In San Francisco, people near and far hit flocked to its beaches.

Residents said when the fog disappears in exchange for some warn weather, you have to bask in it.

"Never, never get this weather, said TQ Byrd from San Francisco. I mean look at all these people out here. It's so many people, and you never really see that many people at this beach especially in the city."

Mary McCourt from Chico said the mid-70's at the beach beat the temps back at home.

"Triples, and that's pretty consistent," said McCourt. 'That's why I'm thinking of maybe moving back, because I'm over the summers up there."

The first official day of summer is June 21, but some say with high temperatures already setting in, summer seems to have arrived.