Biden left the state in February of 2020 before polls had even closed on his fifth-place primary finish. But he returned as president, eager to talk up the billions in investments in upgrading America’s roads, bridges and transit systems that he signed into law Monday.

Walking across a rusted, rural New Hampshire bridge that’s been tagged a priority for repairs since 2014, Biden framed the infrastructure law in direct and human terms. He said it would have a meaningful impact here, from efficient everyday transportation to keeping emergency routes open.

"This isn’t esoteric, this isn’t some gigantic bill — it is, but it’s about what happens to ordinary people," he said. "Conversations around those kitchen tables that are both profound as they are ordinary: How do I cross the bridge in a snowstorm?" 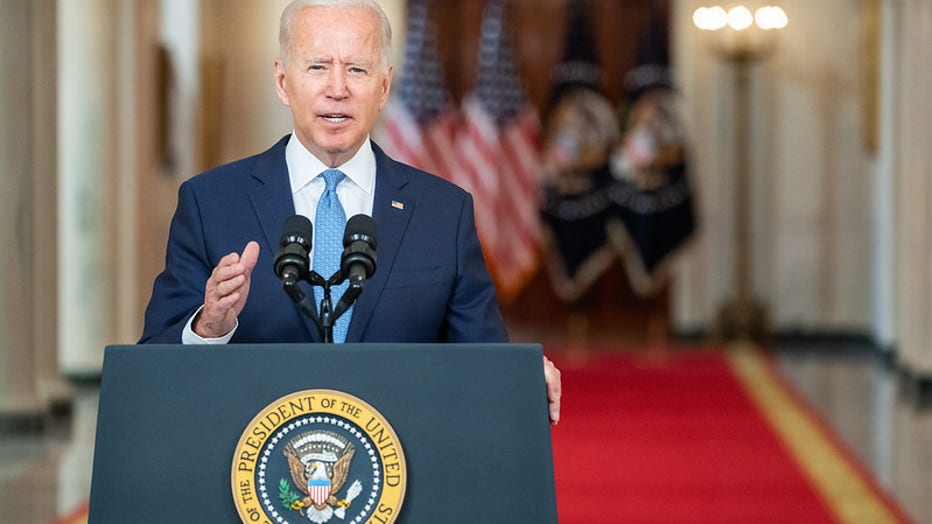 Biden is down in the polls but hopes to use the successful new law to shift the political winds in his direction and provide fresh momentum for his broader $1.85 trillion social spending package now before Congress.

The president held a splashy bipartisan bill-signing ceremony Monday for hundreds on the White House South Lawn, where lawmakers and union workers cheered and clapped.

"America is moving again, and your life is going to change for the better," Biden promised Americans.

The president and members of his Cabinet are moving, too — spreading out around the country to showcase the package. Biden himself has stops Tuesday in Woodstock, New Hampshire, and Wednesday in Detroit to promote the new law as a source of jobs and repairs for aging roads, bridges, pipes and ports while also helping to ease inflation and supply chain woes.

"As he goes around the country, he’s really going to dig into how these issues will impact people’s everyday lives, what they talk about at their kitchen tables," said White House press secretary Jen Psaki.

What's in Biden's signature infrastructure bill? Here's a look at the $1 trillion investment in the United States.

Also this week, Environmental Protection Agency Administrator Michael Regan will take a tour through the South, hitting Louisiana and Texas, Interior Secretary Deb Haaland will visit Massachusetts, California and the state she represented in Congress, New Mexico, and Vice President Kamala Harris will visit Ohio, among top administration officials on the road.

The president, whose poll numbers have continued to drop even after passage of the bill, is pleading for patience from Americans exhausted by the pandemic and concerned about rising inflation. The White House says the infrastructure funding could begin going out within months, and they say it will have a measurable impact on Americans’ lives by helping create new, good-paying jobs.

Biden defeated Donald Trump by 7 percentage points in New Hampshire in the 2020 election, but his popularity has sagged in the state. In a University of New Hampshire Survey Center Granite State Poll last month, his overall favorable rating was 34%, with 53% having an unfavorable view.

On Tuesday, the president visited a bridge that carries state Route 175 over the Pemigewasset River. Built in 1939, the bridge has been on the state's "red list" since 2014 because of its poor condition. Another bridge over the river was added in 2018.

"The president is going there because there is a broken-down bridge that needs to be repaired," Psaki said.

President Joe Biden is hailing Congress’ passage of his $1 trillion infrastructure package as a "monumental step forward for the nation."

New Hampshire’s Republican Gov. Chris Sununu, who planned to greet Biden at the airport, sent a letter to the president Tuesday asking him to work with Congress to earmark even more infrastructure funding for the state. He also urged Biden to address supply chain issues, workforce shortages and the rising cost of construction materials.

"Ensuring that roads get built, bridges get repaired, and drinking water gets improved will be even more challenging given the economic challenges Washington seems oblivious to," Sununu said.

Under the funding formula in the bill, New Hampshire will receive $1.1 billion for federal-aid highways and $225 million for bridges, the White House said.

The infrastructure bill overall contains $110 billion to repair aging highways, bridges and roads. According to the White House, 173,000 total miles or nearly 280,000 kilometers of U.S. highways and major roads and 45,000 bridges are in poor condition. The law has almost $40 billion for bridges, the single largest dedicated bridge investment since the construction of the national highway system, according to the Biden administration.

Many of the particulars of how the money is spent will be up to state governments. Biden has named former New Orleans Mayor Mitch Landrieu as the liaison between the White House and the states to help ensure things run smoothly and to prevent waste and fraud.