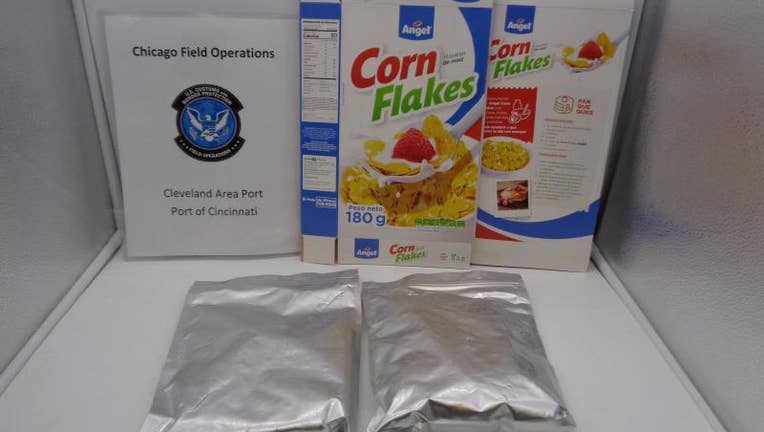 Border Patrol tested the cereal and learned the 44-pound shipment of Corn Flakes had been coated with cocaine valued at $2,822,400. (Source: U.S. Customs and Border Patrol)

CINCINNATI - When Customs and Border Protection Narcotics dog Bico alerted authorities to a large shipment of cereal on Feb. 13, it probably didn’t come as a surprise when the white powder and grayish substance covering the flakes were not frosting.

After all, Cincinnati Port Director Richard Gillespie said drug smugglers will hide narcotics in anything imaginable.

Authorities tested the substances and learned the 44-pound shipment of Corn Flakes had been coated with cocaine valued at $2,822,400.

But thanks to Border Patrol agents and their K-9, the Peruvian shipment was stopped before it could reach the destined private residence in Hong Kong.

"The men and women at the Port of Cincinnati are committed to stopping the flow of dangerous drugs, and they continue to use their training, intuition, and strategic skills to prevent these kinds of illegitimate shipments from reaching the public," Gillespie said in a news release.

In the week since the Cincinnati attempt, officers in Fort Lauderdale seized luggage filled with cocaine, and agents in Miami’s airport busted a suspect for trying to smuggle cocaine inside a pair of sandals.

Last year, Border Patrol seized 3,677 pounds of narcotics at ports of entry on a typical day.