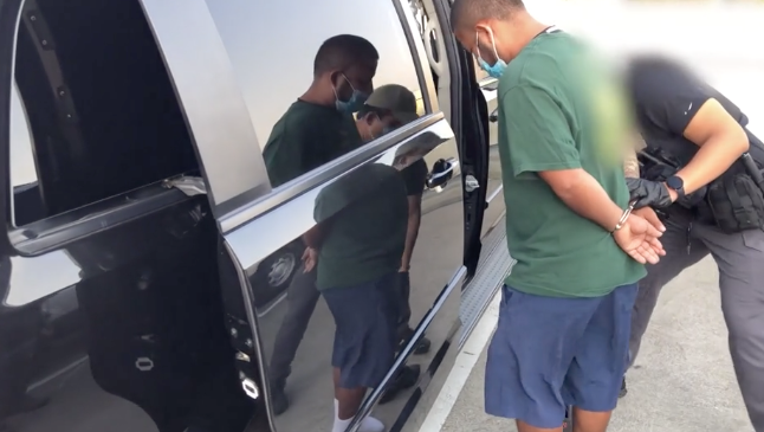 A 29-year-old man from Guatemala was arrested in Daly City in front of the Westlake Village Apartments for multiple DUI convictions.

SAN FRANCISCO - Among the inmate firefighters who battled massive California wildfires last year was Bounchan Keola, a Laotian immigrant who had been sentenced to 28 years in prison for a gang-related shooting when he was 16.

The state later turned him over to federal immigration authorities, and advocacy groups are again spotlighting his case in an effort to win approval of a bill that would prohibit state prisons from transferring inmates to U.S. Immigration and Customs Enforcement.

Keola was released by ICE in January but knows his future in the United States is fragile. He is a legal resident, having fled Laos with his parents when he was 2, but federal law allows the deportation of immigrants with certain criminal convictions.

Keola told reporters Wednesday that he felt "painfully betrayed by (the California Department of Corrections and Rehabilitation), thinking that this is what they do to people who risk their lives to protect peoples' homes from wildfires." Keola said he could be deported at any moment to Laos, "a country I have no ties to."

Last year, the state transferred more than 1,400 inmates to immigration authorities, according to the Asian Prisoner Support Committee, an advocacy group.

California’s Democratic leaders, including Gov. Gavin Newsom, frequently battled the Trump administration over immigration but the governor parted ways with some over a previous version of the bill. In a veto message in 2019, Newsom wrote that he worried it would "negatively impact prison operations and could hinder and delay needed transfers between facilities for myriad situation-specific reasons such as medical care and court obligations."

Newsom's office did not immediately respond to a request for comment on the latest legislative effort. ICE said it does not comment on pending legislation.

"It is time to end the double punishment of immigrant Californians," said Assemblywoman Wendy Carrillo, a Los Angeles Democrat who introduced the bill last week. "We do not need to devote valuable time and resources on unnecessary ICE transfers."

Sen. Scott Wiener, a San Francisco Democrat and a principal co-author of the bill, said the pandemic lent additional urgency to keeping immigrants out of detention. ICE had 14,397 people in custody nationwide last week, down from more than 56,000 in 2019 and largely a result of efforts to contain the spread of the virus.