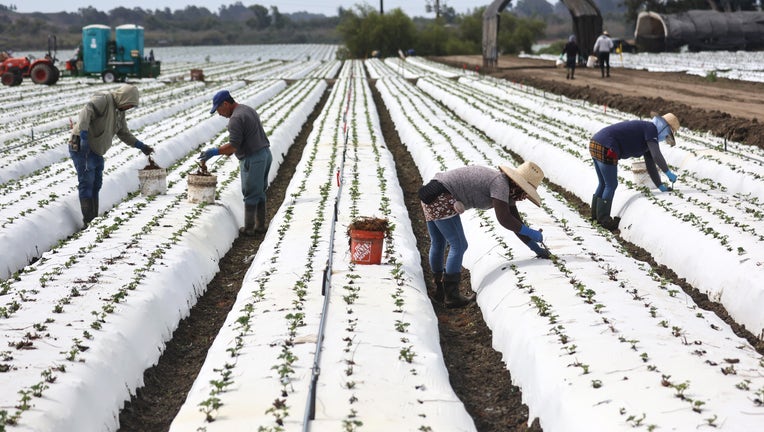 VENTURA, CALIFORNIA - AUGUST 05: Farm workers labor in a strawberry field amid drought conditions on August 5, 2022 near Ventura, California. Around 800,000 acres of farm fields could be left unworked this year amid unprecedented cuts to water suppli

SACRAMENTO, Calif. - A broadly smiling California Gov. Gavin Newsom joined about two dozen jubilant, cheering farmworkers camped outside the state Capitol Wednesday to sign one of the most contentious bills before him this year, reversing course on a measure to help farmworkers unionize after President Joe Biden and Vice President Kamala Harris supported it.

The White House support pinned Newsom in a difficult political position after his office announced before Democratic lawmakers sent him the bill that he would not sign it.

But Newsom said he approved the bill after he, the United Farm Workers and the California Labor Federation agreed on clarifying language to be considered during next year's legislative session to address his concerns around implementation and voting integrity.

The agreement includes a cap on the number of unionization petitions over the next five years and will allow state regulators to better protect worker confidentiality and safety, Newsom's office said.

"Si, se puede," the farmworkers chanted as Newsom signed the bill, echoing the UFW's longtime slogan -- roughly, "Yes, we can" in Spanish.

"California's farmworkers are the lifeblood of our state, and they have the fundamental right to unionize and advocate for themselves in the workplace," Newsom said in a statement after signing the bill. "Our state has been defined by the heroic activism of farmworkers, championed by American icons like Cesar Chavez, Dolores Huerta, and Larry Itliong. California is proud to stand with the next generation of leaders carrying on this movement."

The new law will allow farmworkers who provide much of the nation's fruits and vegetables to vote by mail in union elections as an alternative to physical locations. Proponents say that would help protect workers from union busting and other intimidation, while owners say such a system lacks necessary safeguards to prevent fraud.

It will give owners a choice between "a flawed mail-ballot scheme or ... an unsupervised card-check scheme," said the California Farm Bureau Federation in opposition before Newsom announced the agreement on additional safeguards.

Newsom vetoed similar legislation last year, as did his two most recent predecessors.