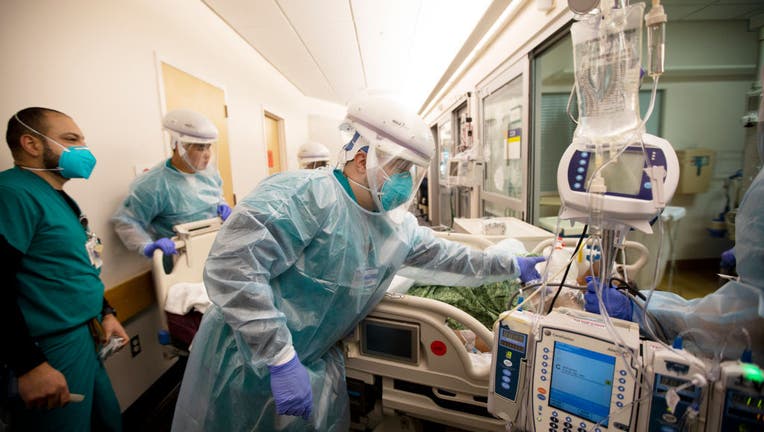 SANTA MONICA, CA - DECEMBER 15: A patient surved a code blue and then was rushed to ICU to be intubated and be placed on a ventalator inside Providence Saint John's Health Center on Tuesday, Dec. 15, 2020 in Santa Monica, CA. They have expanded their

LOS ANGELES - Los Angeles County on Wednesday reported another 806 deaths from coronavirus during the winter surge, pushing California's toll above 50,000, or about one-tenth of the U.S. total from the pandemic.

The county, which has a quarter of the state's 40 million residents, said the deaths mainly occurred between Dec. 3 and Feb. 3. The Department of Public Health identified them after going through death records that were backlogged by the sheer volume of the surge's toll.

"It is heartbreaking to report on this large number of additional deaths associated with COVID-19 and a devastating reminder of the terrible toll the winter surge has taken on so many families across the county," Barbara Ferrer, Los Angeles County's health director, said in a statement.

The grim figure comes just days after the U.S. recorded a half-million deaths.

While the nation's most populous state has the highest number of COVID-19 deaths in the U.S., it is ranked 25th in the number of cases per capita because of its large population.

The death toll climbed precipitously amid a fall and winter surge that has begun to taper off as cases and hospitalizations drop. Los Angeles County on Wednesday reported an additional 136 new deaths, accounting for nearly half of the state's 314 additional deaths.

The state has begun to ease more restrictions on businesses after lifting a stay-home order about a month ago and Gov. Gavin Newsom has vowed to reopen schools soon despite opposition from some teachers unions.

It took 10 months for the state to hit 25,000 deaths on New Year's Eve and less than two months for that number to double.

When the state hit the 40,000 death mark on Jan. 30, it had recorded 3,800 deaths in the previous week. In state figures reported through Tuesday, it recorded 2,370 deaths over the past week.

Because of a lag from infection to illness to hospitalization and death, the number of deaths have fallen more slowly than infections, but are expected to continue to drop.

Deaths have hit the poor, and Latino and Black communities much harder. People working essential jobs have greater exposure to the virus and are more likely to bring it home to others who share crowded living quarters.

The death rate for Latinos is 21% higher than the statewide figure and 7% higher for Black people, according to the state Department of Public Health.

Case rates are 38% higher in communities where the median income is less than $40,000.