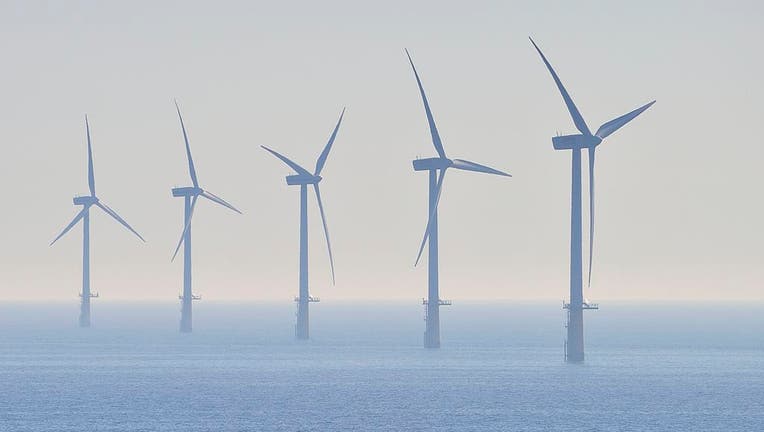 WASHINGTON - President Biden wants to make offshore wind generation a huge contributor to coastal regional energy grids where most Americans live. The breath and width of the enormous proposal eventually could solve many of the world's energy needs for a long time to come.

The Biden offshore wind energy plan is as bold and broad of an energy plan presented in generations. The president is proposing massive floating wind energy farms, tethered to the ocean floor, connected to underwater transmission lines feeding massive power into electrical grids.

The wind industry supports OffshoreWindCA.org. a well-heeled advocate of wind energy. "One of the specific commitments the Biden Administration did is they set a goal to reduce the cost by 70% by 2035 which is roughly the timeframe in which offshore wind would be needed in California," said Adam Stern, OffshoreWindCA.org’s executive director.

As to cluttering up coastal scenery, even giant wind generators 800 feet tall, can be put out of site and out of mind. "These offshore wind farms would be 20 miles offshore so basically beyond the view that people would have on most days," said Mr. Stern.

There are huge environmental issue to be resolved. What about the tethers wounding sea life? What damage might they do to underwater habitat or fishing grounds? "There still are environmental concerns that would need to be addressed, but it's much more manageable being that far offshore," said Stern.

Ocean winds are steadier, stronger winds, even after sunset, works very well with offshore wind farms. Such farms already operate off the coast of Maine. That's been driven by the fact that they really don't have any places to put onshore wind in much of the Northeast," said Professor Bushnell.

The western states have a lot of onshore wind rich sites, that could be used, but there are costs to build the power lines and other infrastructures get that power to California. "Offshore wind, my understanding is, does receive a large tax credit than a lot of other forms of renewable energy which will help push it towards competitiveness," said Bushnell.

Offshore wind facilities, as opposed to those in the interior west, would require a lot of California  workers to build and maintain the offshore wind farms.