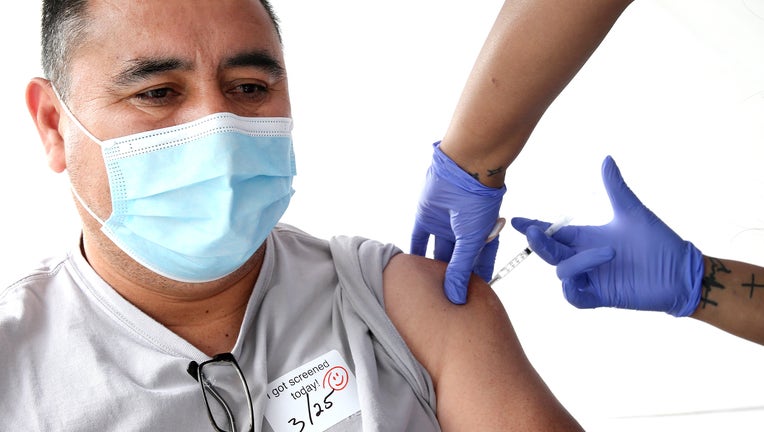 LOS ANGELES - Before California throws open its coronavirus vaccine program to all adults on April 15, there will be a two-week window when millions of people between the ages of 50 and 64 can get their shot.

The rollout for this age group, who become eligible on Thursday, has prompted an uptick in appointment requests and has raised concerns about whether two weeks is enough to get to everybody when there is uncertainty about supply levels as well as lingering questions about accessibility.

The California Department of Finance, which monitors population data, projects that there are 7.2 million people in the state between the ages of 50 and 64. Currently, only about 23% of Californians in that age group have received at least one dose of a vaccine, according to the state, compared to 37% of people 18 to 49, likely due to their occupation or because they have qualifying health conditions.

"The two-week period is concerning given the challenges that remain with supply and access to technology," Rafi Nazarians, associate state director at AARP, told the Los Angeles Times. "We’re going to continue to urge the prioritization of those 50-plus Californians … just to ensure that those who are highest risk are able to obtain vaccines."

Dr. Paul Simon, chief science officer for the Los Angeles County Department of Public Health, estimated that somewhere between 800,000 and 1 million additional people in the county would become eligible as of April 1.

"There will likely be a rush. I want to make sure the public recognizes that there may be challenges to getting an appointment immediately," he said during a briefing on Friday. "It just, again, reflects the limited supply of vaccine."

The surge of supply will help accommodate the huge swell of people, but Simon said it will take time for the county to work through its already lengthy vaccination queue and accommodate those who will soon become eligible.

"Even with an increased supply of vaccine, we certainly can’t handle close to a million people over that first week, given all the other groups that are also currently being vaccinated," he said. "But I would expect, over the following several weeks, the demand will diminish a bit and things will open up, particularly as this vaccine supply continues to increase. And so I urge people to just be patient."

Nazarians said many people over 50 face issues with mobility, language barriers and technology that may keep them from getting an appointment and getting to a vaccination clinic. He said he will urge state officials to make sure they reach older adults, particularly people who aren't online or are homebound.

Meanwhile, access to obtain an appointment has been an ongoing challenge as more people compete for available slots.

"I do think it will be several weeks before I can find an appointment," said Jeanette Ziolkowski, 63, of Los Angeles, adding that she doesn't believe there will be enough time for her cohort to get vaccinated before everyone becomes eligible in April.

"Sixty-five and over has been open since January, and I believe that it is still a struggle for many in that group," she said.