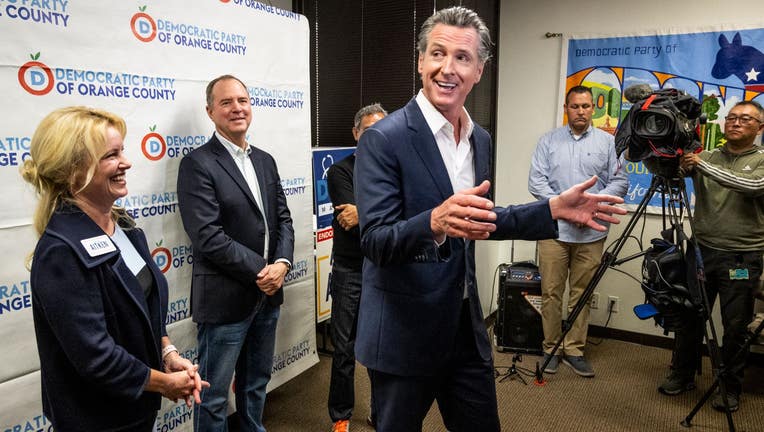 SACRAMENTO, Calif. - Democrat Gavin Newsom easily won a second term as California’s governor on Tuesday, beating a little-known Republican state senator by mostly ignoring him while campaigning against the policies of Florida Gov. Ron DeSantis and Texas Gov. Greg Abbott, two leading Republicans who like Newsom may run for president.

It was the second decisive statewide victory for Newsom in barely a year. In September 2021, he easily beat back an attempt to kick him out of office that was fueled by anger over his pandemic policies. The failed recall solidified Newsom's political power in California, leaving him free to focus on the future — which many expect will include a run for the White House.

"I think that he becomes one of the highest-profile Democrats in the country, given there is very likely going to be divided government in Washington D.C., and the Democrats will be looking for any and all allies to promote their agenda," said Matt Barreto, a UCLA political science professor. "And Gov. Newsom will have a very large platform from California to do that."

It was an expected outcome in the nation's most populous state, where there are nearly twice as many registered Democratic voters as Republicans. The GOP candidate, state Sen. Brian Dahle, could not raise enough money to run an effective campaign. Dahle, a farmer from the state's rural northwest corner who also owns a trucking company, spent the final weeks of the campaign trying to draw attention by driving a semi truck around the state with a large campaign banner.

With no political threats at home, Newsom has spent the past year signing a raft of liberal legislation that could help him win over Democratic voters in a contested presidential primary. That included enacting more than a dozen laws aimed at making California a sanctuary for women in other states seeking abortions now that the U.S. Supreme Court has overturned Roe v. Wade.

He ordered state regulators to ban the sale of most new gas-powered cars by 2035. His budgets have paid for every 4-year-old to go to kindergarten for free and will cover the health care costs of all low income immigrants in California who are living in the United States without legal permission.

But a potential Newsom presidential campaign would have to answer for a host of California's most stubborn problems, including an ever expanding homeless population and an increase in crime that has contributed to a general sense of unease among voters. Meanwhile, soaring inflation has only increased the state's high cost of living, contributing to California's first population decline and the loss of a congressional seat.

Newsom has pledged to tackle some of those issues immediately in his second term, vowing to call a special session of the state Legislature next month to pass a new tax on oil company profits as a way to combat the state's record-high gas prices. But Newsom's next term will begin with state tax collections falling below expectations, setting up a potential round of unpopular budget cuts.

Nationally, Newsom has sought the role of party messenger, using some of his campaign money to pay for ads in Florida and Texas targeting those state’s conservative governors. Newsom has said repeatedly his goal is to revamp the Democratic Party’s strategy, urging others to follow his example of a more aggressive style.

The constant jabs at DeSantis, Abbott and other leading Republicans has only increased speculation about Newsom’s future. Some have floated his name as a potential replacement for President Joe Biden in 2024 or a run in 2028. Newsom has repeatedly denied both, saying he backs Biden and wants Vice President Kamala Harris, a friend and fellow Californian, to be president.

During last month's only debate of the governor's race Newsom promised to serve all four years if once reelected — a promise many politicians have made and broken in the past.

As for his next term as governor, Newsom has said he will focus on the extremes: "extreme drought, extreme weather, extreme polarization in our body politic as it relates to preserving and protecting democracy."

"The rights revolution has been rolled back in real time in so many red states, all of those things are very consequential," Newsom said after a debate last month. "And this state has more to lose, more to gain, than any other state in the country."