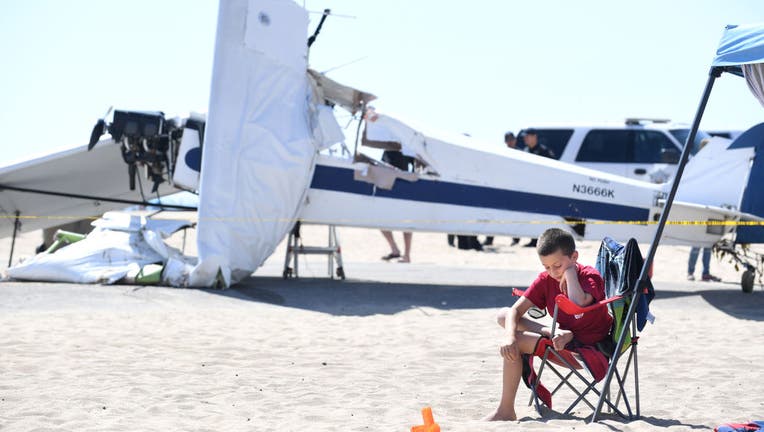 CAPITOLA, Calif. - A young Capitola lifeguard is being hailed as a hero after saving a pilot who crashed into the ocean.

Dane Morin sprung into action to rescue a pilot from a small passenger plane that crashed into the water at Manhattan Beach on July 22. The 19-year-old swam about 200 yards and was the first lifeguard to reach the pilot, according to the Santa Cruz Sentinel.

Morin reportedly saw the plane crash from afar and immediately sprinted to the water, hurdling multiple fences and beach chairs along the way. He swam through a high surf and powerful rip current to reach the victim.

The plane's wings were dangling, and it was starting to sink into the ocean when Morin reached the aircraft.

"In that moment, I didn’t hesitate and just grabbed my tube and my fins and sprinted down towards the accident," Morin said to the Sentinel. "It was a small passenger plane and the wings were falling apart and it was submerging already."

When Morin arrived at the plane, he said the pilot didn't seem to have any significant injuries but was in extreme shock. He maneuvered the pilot onto the flotation device and began to backstroke both of them to shore.

When Morin looked back he said the plane bobbed and sunk to the surf.

Morin and the pilot were forced to duck beneath several waves because of rough conditions that day. They eventually made it to shore and were met by dozens of paramedics, firefighters and police officers.

The pilot was immediately put into a neck brace, though no significant injuries were reported. The Federal Aviation Administration is investigating the crash and the pilot has not been identified.

The Capitola City Council honored Morin at its July 28 meeting.

"Most of us would probably tend to freeze under that circumstance, but I think you demonstrated such a presence of mind and courage to know what to do in that situation," said Capitola Mayor Sam Storey. "I commend you on that and I think it’s a reminder to all of us that sometimes life throws curveballs at us and we always need to be alert, always need to be prepared."