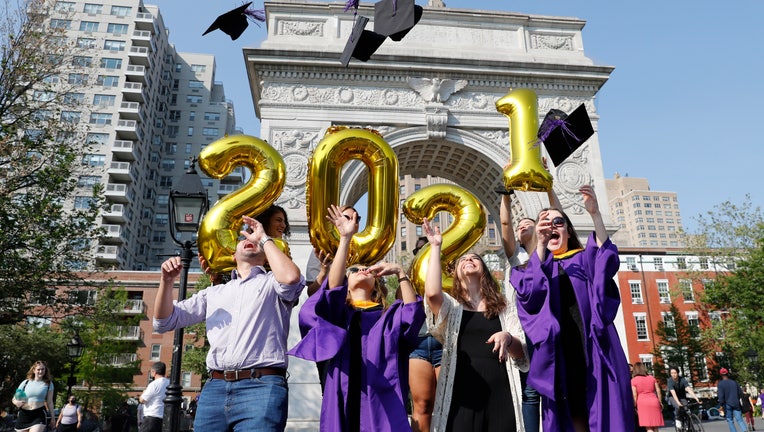 LOS ANGELES - Graduation season is upon the U.S. as students began a new chapter in their lives.

Some ceremonies took place virtually as the COVID-19 pandemic lingers, while other schools hosted in-person events as cases continue to fall and vaccinations rise.

President Joe Biden said members of the graduating class of 2021 are leaving school at an "inflection point" that gives them influence to shape the nation and the world around them like few others.

Shoe policy almost kept student from walking at graduation, until teacher gave him his pair

A teacher stepped in to help, after a senior student in Louisiana was almost banned from walking in his high school graduation ceremony after he didn’t follow the school’s shoe policy.

Biden’s brief video message to graduates was released Friday by the White House as the coronavirus pandemic put a dent in commencement ceremonies. Comparing today’s students to those who graduated during the era of the civil rights and anti-war protest movements, Biden encouraged them to seize the moment to tackle climate change and systemic racism.

RELATED: Phone flashlights save the day when power goes out during Texas graduation

Biden told the graduates that only once in every few generations does a class enter history at point "where it actually has a chance to change the trajectory of the country," as he said theirs will.

"You’re going to see more change in the next 10 years than you saw and we saw in the last 50 years," Biden said. "It’s going to be up to you to translate that unprecedented change into a greater measure of happiness and prosperity for not only you and our nation, but for the world around you. "

To mark the special occasion, Tubi has a list of coming-of-age throwback movies to enjoy:

17 Again (2009) - "Rounding the corner of middle age, a failed husband and father gets the chance at a life redo by miraculously returning to his high school self."

Almost Adults (2017) - "In their last year of college, friends struggle to sustain their bond, as one’s emerging sexual identity and the other’s heartbreak pull them apart."

College (2008) - "They're not in college yet, but three high school seniors unexpectedly find themselves with the wildest frat on their prospective school's campus."

Dancer, Texas - Pop. 81 (1998) - "Four teenage friends prepare to leave home for Los Angeles after graduation, but the pull of small town life brings doubts to each of them."

Graduation (2008) - "As high school graduation draws near, four high school seniors put their futures on the line to help a friend in desperate need of financial assistance."

Heathers (1988) - "When a snobbish high school clique threatens to ruin her reputation, a teenage girl teams up with a sociopath and plots to kill the cool kids."

Remember the Daze (2007) - "Welcome to 1999 suburbia. A group of high school students experiments with drugs and sex while contemplating what comes next in life."

Sleepover (2004) - "Before their freshman year in high school, four best friends have a slumber party that turns into a life-changing adventure."

Summerland (2020) - "A high school graduation road trip takes three friends to a summer music festival where one of them is hoping to connect with a guy he met online."

The Haunted Graduation Photo (2017) - "An invincible, immortal invitation spell casts a weird and unknown secret during the graduation season."