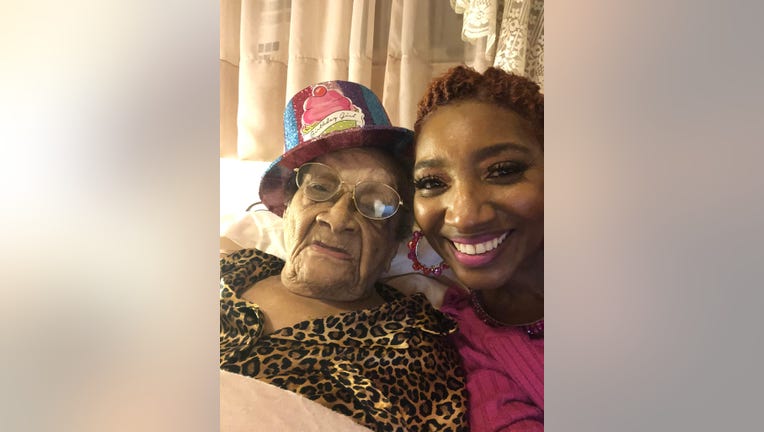 OAKLAND, Calif. - A very special celebration was held on Tuesday for an Oakland woman on her 104th birthday, as she was honored and revered as a woman whose life was about caring for others.

Described as a surrogate mother to many over the years, Mary Ella Gilliland’s nurturing qualities were so much of who was, that those who knew her simply referred to her as "Mama."

And perhaps there's no one’s life she's touched more than Renee Cage-Watson’s. The licensed clinical social worker and life coach said that the person she’s become was all owed to the woman who took on the role as her mother when she was only 17-months-old.

Cage-Watson said that’s when her biological mother, who suffered from substance abuse, was not able to care for her. And without hesitation, Mary Ella Gilliland and her late husband, Wilburn Gilliland, stepped in.

Cage-Watson said that Mama took care of her and raised her through high school. And she continued to be there for her when she attended college at California State University, East Bay and then went on to receive her master’s degree in social welfare at the University of California at Berkeley. 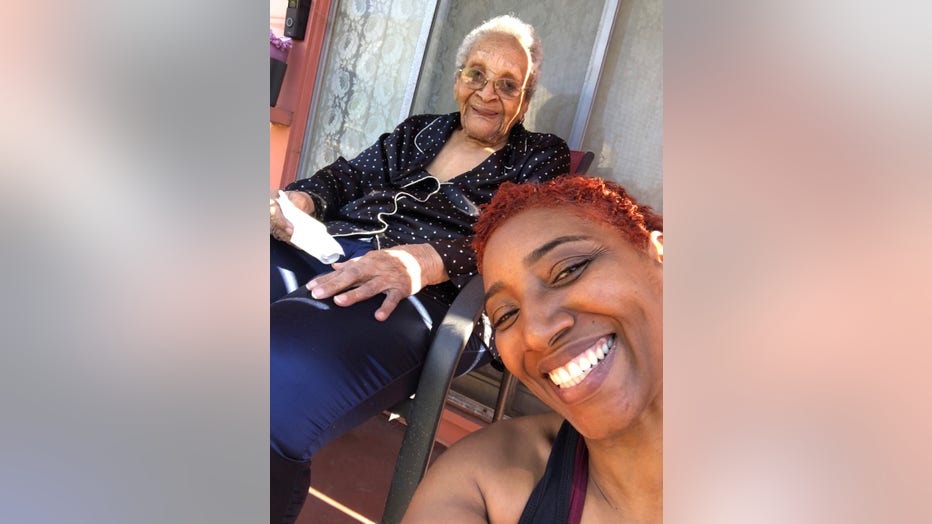 While she was never legally adopted as a minor, Cage-Watson said that later in life, the pair did make it official as she and Mama decided to go through the legal process of adult adoption.

KTVU first shared the story about Cage-Watson and Gilliland last year when a celebration was held for Mama’s 103rd birthday.

This year, like last, guests joined on Zoom to express their love and offer their warm birthday wishes to Gilliland. 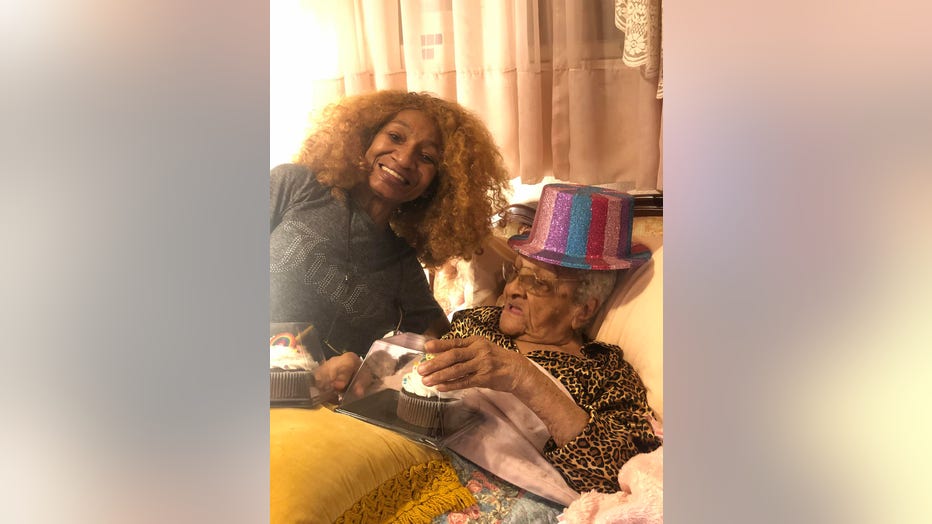 A special celebration was held for Oakland resident Mary Ella Gilliland who turned 104 on Tuesday, Dec. 7, 2021.

For the celebration, the woman of the hour donned a festive party hat that read "Birthday Girl," as Cage-Watson made sure Gilliland was treated to some of her favorite food and drink which included candied yams, mac n’ cheese, cabbage and fried fish from Lena’s Soul Food in Oakland, and some Coca-Cola to wash it down. And of course, there were birthday sweets in the form of a confetti sprinkled cupcake. 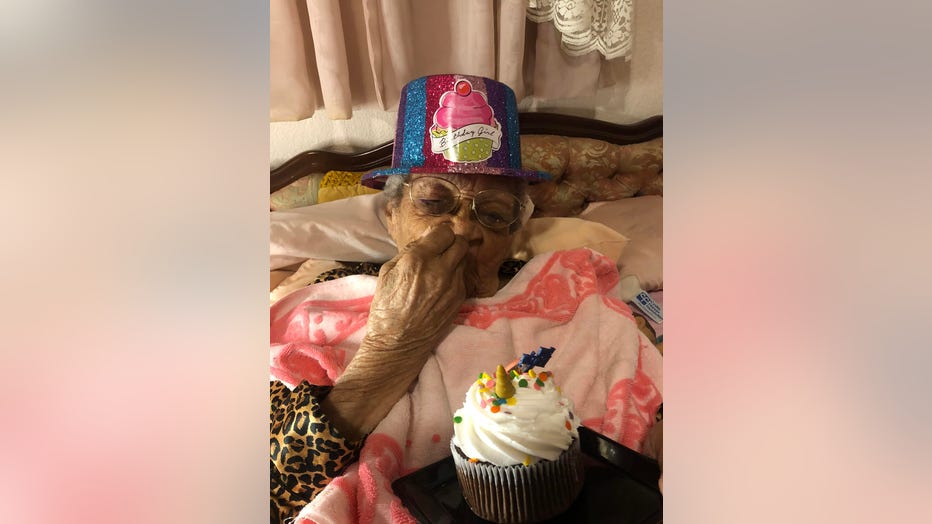 Cage-Watson said that her mom's dementia was in an advanced stage but marveled at how well she was doing physically, especially given her age. "She’s still in good health and only takes one medication which I think is awesome! I’ll be 50, and I take more than she does," she told KTVU.

"She still can walk unassisted, although I do help her, she still feeds herself, can see and hear, read things from the television well (small print)." Cage-Watson said, adding that her mom laughed, had a great attitude and continued to have a strong appetite.

Her mind does get lost at times, and Cage-Watson said that conversations get pretty jumbled, but she’s there to listen, as memories of Gilliland’s own mother and grandmother have increasingly dominated the centenarian's thoughts.

And these days, Mama’s ever-nurturing ways and meaningful memories have also showed up in the most precious ways.

The daughter said that Gilliland loved to care for and cuddle with her dolls which she called "her two little babies." And the stories of the dolls, Cage-Watson shared, were intertwined with the story of how she came into Mama’s life. 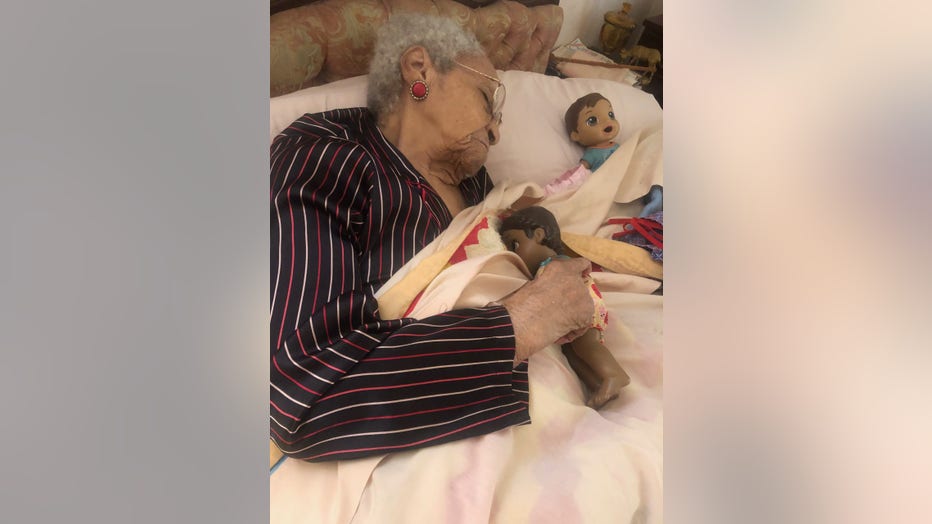 Oakland resident Mary Ella Gilliland turned 104 on Tuesday, Dec. 7, 2021. Her daughter said the woman many referred to as "Mama" loved to care for her dolls, which she called her "two little babies." (Renee Cage-Watson)

"I think it’s so sweet," Cage-Watson said. "She’ll say, ‘The mama left these babies and ain’t came back.’ That was my story."

Cage-Watson said she felt blessed that she’s been able to return the unconditional love that was first offered to her when she was just a baby and Gilliland became a mother to her.

"She gets loved on everyday by me,"Cage-Watson said of her mom. "Her favorite to receive is a good scratching of the back. She’ll say, ‘Awww baby that feels sooo good.’ It just warms my heart."

On Tuesday, the smiling, proud daughter posted photos of Gilliland on Facebook and asked people to celebrate this caring, kind, and loving woman with her. "Please join with me," she wrote, "in wishing my Mama a happy 104th birthday."