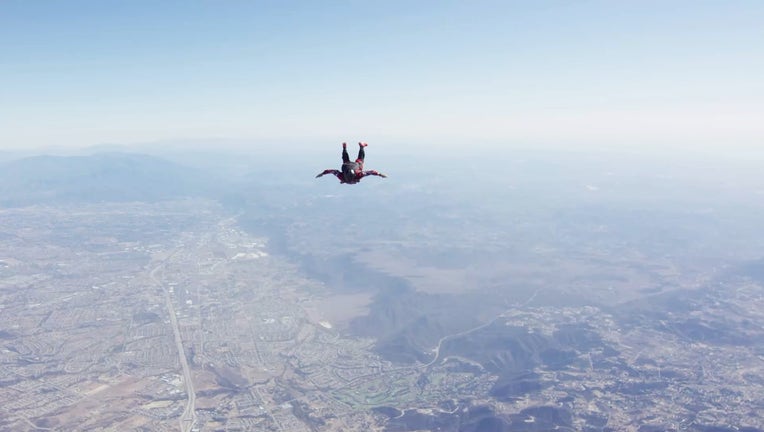 File Photo. Skydiver jumps out of a plane.

LODI, Calif. - The family of an 18-year-old man who died in a 2016 after his parachute didn't open was awarded a $40 million judgment this week against the owner of a troubled skydiving school with a history of tragic deaths.

Paul Van Der Walde, the attorney representing the family of Tyler Turner of Los Banos, California, said Wednesday the multimillion-dollar penalty signed by a judge Monday is significant not only because of the amount, but because it specifically targets the owner of the skydiving school Skydivers Guild Inc. in Lodi.

"We are hoping this will allow us to get this place closed or be sold to a responsible owner who can operate it safely," Van Der Walde said.

Bill Dause, the skydiving school owner, declined to talk about the lawsuit saying: "We appreciate your call, but no comment."

Turner and the skydiving instructor he was jumping in tandem with died on Aug. 6, 2016, near the skydiving center. Investigators said he plummeted 13,000 feet to the ground when the instructor, who was attached to Tyler by a harness, could not get their parachutes open.

"He (the instructor) was still under a probationary period when they did the jump," Van Der Walde said. "And he did not have the appropriate emergency training."

Turner’s death was one of nearly two dozen fatalities that have happened at the center since 1981, Van Der Walde said.

Turner was a straight-A student at Pacheco High School with a 4.3 grade point average and had earned a full scholarship to the University of California in Merced, where he planned to focus on biomedical engineering.

His mother, Francine Salazar Turner, was relieved that nearly five years of litigation are over. She misses her son terribly and said she wants to use the judgment money to start a scholarship fund in his name.

"He was an amazing person," Francine Turner said. "He had an adventurous spirit and wanted to do so much in this world."