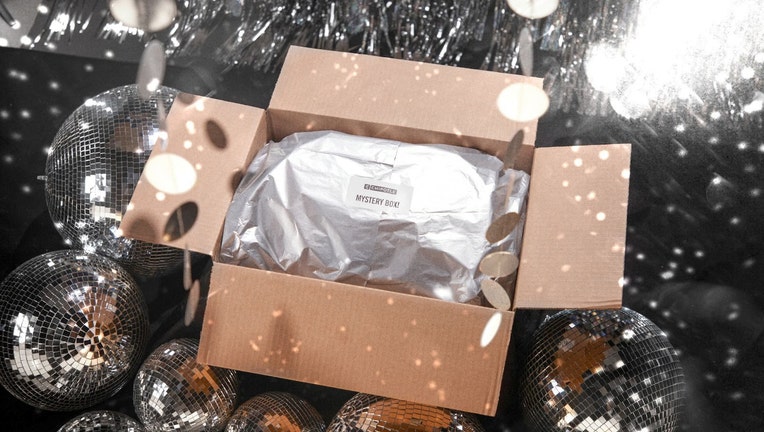 Chipotle is selling Mystery Boxes on December 1 featuring exclusive Chipotle Goods merchandise. Those who order within the first 48 hours could get one with a surprise $500 gift card. (Credit: Chipotle)

The fast-casual restaurant chain said the boxes are available for purchase starting at 9 a.m. PT on Thursday, Dec. 1. There are two versions of the mystery box: a small burrito box for $30, which come with three to five items ($60 value), and a large burrito box for $50 which comes with four to eight items ($100 value).

Chipotle did not say what items come in the box, only that all the goods "are unsized with no clothing items featured."

In addition, Chipotle said it also hid surprises in some of the boxes, including stainless steel $500 Chipotle gift cards and Chipotle's meme-inspired Cilantro Soap, which sold out in less than 12 hours after originally launching in December 2021.

Lucky fans who order a mystery box within the first 48 hours — available at www.chipotlegoods.com — have a chance to score one of the 10 mystery boxes with hidden gift cards.

"We created Chipotle Goods Mystery Boxes with our superfans in mind," Chris Brandt, Chipotle’s chief marketing officer, said in a statement. "You can now gift, or keep, exclusive Goods for the holiday with a chance at the ultimate surprise of receiving a limited-edition $500 Chipotle gift card in your box if you order in the first 48 hours."

Chipotle unveils recipe and ingredients for its guacamole

With some avocados, lime juice and other ingredients, you can make Chipotle guac at home.

Chipotle, which operates nearly 3,100 restaurants in the United States, Canada, the United Kingdom, France, and Germany, said 100% of profits from its Chipotle Goods go to support organizations "that are making apparel and farming more sustainable."

Other food brands have made headlines in recent days for their unique marketing tactics, including meal kit delivery company HelloFresh, which teamed up with Warner Bros. to launch limited-edition Buddy the Elf Spaghetti meal kits.