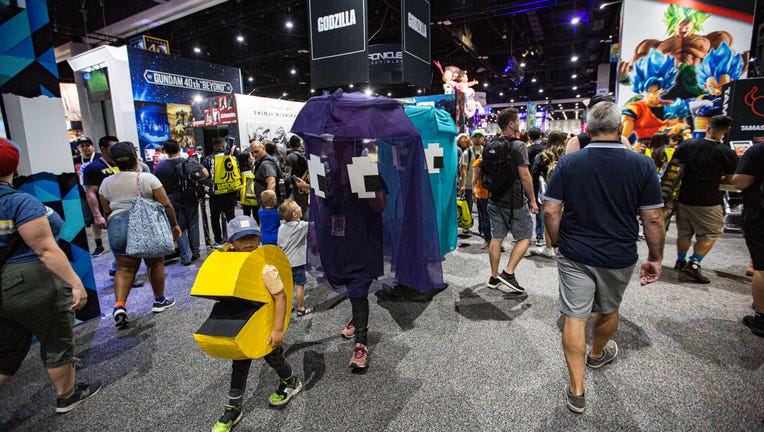 A group of Pacman cosplayers walk the floor at 2019 Comic-Con International on July 21, 2019 in San Diego, California. (Photo by Daniel Knighton/Getty Images)

SAN DIEGO - San Diego Comic-Con will remain virtual for the July event, but organizers are planning for a smaller-scale gathering later this year.

Comic-Con announced Monday that the annual confab will return to virtual for a second-straight year between July 23-25. The in-person experience was canceled again due to coronavirus-related cautions around large gatherings.

Organizers said postponements and other challenges caused by the pandemic left them with "limited financial resources." As a result, the virtual convention in July was reduced from four to three days.

However, organizers said they are planning a smaller in-person November event in San Diego. The details have not yet been released.

Comic-Con attracts more than 135,000 people -- often elaborately costumed -- to the Gaslamp District every year for the comic book convention.

It is not uncommon for thousands of people to gather in a single room for a panel discussion, and the exhibit hall is usually jam-packed with people perusing merchandise.

Last year, Comic-Con organizers postponed its smaller Anaheim, California-based event WonderCon, which had been set to take place in mid-April. A version of the event took place online instead.

Comic-Con organizers were slow to make any official decisions regarding their largest event, a huge money-maker for the restaurants and hotels of San Diego, and an important promotional stop for Hollywood television and films. The event is estimated to generate over $147 million for the local economy each year.