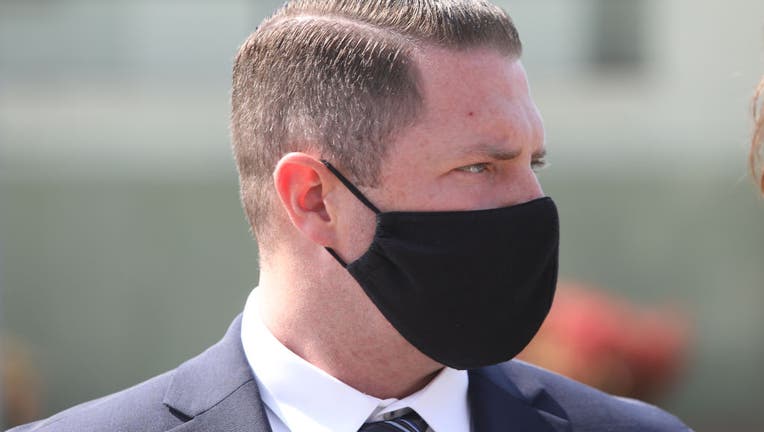 MARTINEZ, Calif. - Convicted Contra Costa County sheriff's deputy Andrew Hall had a hard life – including a neglectful father who was married five times and a mother who was a methamphetamine addict who ignored him and his brother for a series of unsavory men – new details reveal in a probation report obtained by KTVU.

Hall's history provides a rare window into one police officer's life and background, shedding light on his history and childhood, which shaped his views of the word.

But Contra Costa County Superior Court Judge Terri Mockler didn't take much, if any of that into account, when she sentenced Hall on Friday to six years in prison for shooting into a Honda Civic driven by Laudemer Arboleda on Nov. 3, 2018 as the young man with mental health issues was driving away at 6 mph.

There was no justification to shoot Arboleda, the judge said.

Arboleda, 33, was hit nine times, with one fatal wound to the chest.

Hall maintained during his trial that he shot at Arboleda because he feared he was going to get run over. Police had been called out to Danville because a neighbor had said Arboleda was acting suspiciously, knocking on peoples' doors. It turned out, he had once lived in that neighborhood.

His mother also explained that her son had a hard life, too. He suffered meningitis as a child and was in a coma for six months until he came out of it and was never the same, she told the probation office. She loved her son, who enjoyed camping and Disneyland and who had always had a deep fear of police.

A jury convicted Hall of assault, but deadlocked on a manslaughter charge.

Hall is the second Bay Area law enforcement officer to be convicted in modern history. Former BART officer Johannes Mehserle was found guilty of involuntary manslaughter stemming from the 2009 death of Oscar Grant.

Still, Hall's attorneys tried to convince the judge that the now-terminated officer be shown some leniency. The following narrative comes from an interview Hall gave on Nov. 22, 2021 at the Martinez probation office, three years after Arboleda was killed.

His father was a career correctional officer in the state prison system. He divorced his mother when he was three after having an affair. He later married a prison nurse and they also divorced. His father had five wives in all.

"In the wake of the divorce, a destabilizing dynamic set in" on the family, including his mother, who had primary custody over Hall and his brother, according to the probation report.

His father spent very little time with him and his brother. He only saw his father at Christmas and a got the obligatory call on his birthday. Otherwise, the relationship was "non-existent."

After the divorce, he and his brother and mom – considered the "problem child" of her five siblings – began living a "nomadic" life and there was "chaos stemming from his mother's poor choices" including her choices in men. At times, they lived in a trailer park in Alviso near San Jose and at other times with the "various men" the mom was romantically involved with, the report indicates.

Hall's mother was also deeply addicted to drugs, specifically to methamphetamine. She hung out with drug addicts and members of the Hell's Angels motorcycle gang, Hall told the probation officer.

That meant, Hall didn't get to attend elementary school on a regular basis which led to significant academic delays, particularly in math.

He also reported being bullied when he was a young kid.

When he started middle school in Concord, he didn't fit in because he was poor.

"He was targeted by his new peers as he had no choice but to wear the same clothes for weeks at a time," the report stated.

Hall's mother could barely get her sons to school, whether it was logistics or because she had partied too hard with friends.

She also couldn't hold down a job, and her boyfriends often assaulted her. At least one of her boyfriends threw objects at Hall and at his brother, he told the probation officer.

At one point, his mother moved the family into a cabin in Pollock Pines in El Dorado County. The cabin was not sustainable during the frigid winter and pipes would freeze and burst.

Desperate to find shelter, Hall's mom moved her sons to a home in Pittsburg in the East Bay owned by her boyfriend "John." His home was dilapidated and unsafe. John hung blankets as doors and there was no heat in the house. They had no hot water. The floors had nails sticking through.

He and his brother would often hang out in a trailer in back of John's house since his mom was smoking meth with her friends or having sex.

Once, his aunt called Child Protective Services and this was a temporary respite, Hall recounted. The aunt was suspicious her nephews were not being treated well and it was clear to her they were barely eating.

But social services did not remove the boys because their mother refused to let them speak to social workers and bribed them with a trip to Toys R Us instead.

Instead, at age 12, he and his brother were sent to his grandparents who raised them for the next five years, as his mother had simply run off.

Life got a bit better for him and his grades began to improve and his work ethic grew. He began to feel a new sense of "good fortune" just to have a place to do laundry and be able to wear clean clothes in school, he told the probation officer.

He picked up golf and tennis and volunteered in the Key Club. He donated food during the holidays. He donated blood.

One moment in his troubled childhood had a great impact on him and led him to wanting to become a police officer.

He and his brother were riding in the back of their mother's Suzuki Samurai along the Delta. She lost control of her car. He was injured in an accident and became unconscious.

A California Highway Patrol Officer helped him and visited him at the hospital. He was grateful for the officer's concern and decided he wanted to go into law enforcement when he grew up.

The CHP wasn't hiring when he graduated. But the Contra Costa County Sheriff's Office was.

He was accepted in their academy in 2013.

Hall continued to work for the sheriff until Friday, when he was remanded into custody and formerly terminated. He had been on paid administrative leave until then, despite his conviction five months earlier in October.

In an email, Contra Costa County Sheriff's spokesman Jimmy Lee said Hall would be taken to Solano County Jail, and details on where he will serve any remaining time of his sentence will be disclosed when available.

Hall also shot and killed Tyrell Wilson, who was homeless and mentally ill, on March 11, 2021. Wilson had pulled out a knife but is seen on video, backing away from Hall, before the former officer fired a single fatal gunshot range at close range. Community members are holding a rally for Wilson on Tuesday.

Contra Costa District Attorney Diana Becton has yet to file charges in this case.