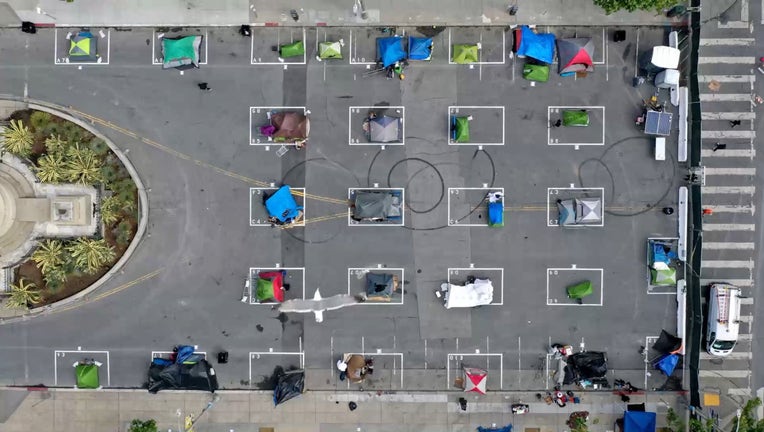 SAN FRANCISCO, CALIFORNIA - MAY 18: An aerial view of San Francisco's first temporary sanctioned tent encampment for the homeless on May 18, 2020 in San Francisco, California. After public outrage mounted over a surge of homeless people and tents fil

SAN FRANCISCO - When the coronavirus emerged in the U.S. this year, public health officials and advocates for the homeless feared the virus would rip through shelters and tent encampments, ravaging vulnerable people who often have chronic health issues.

They scrambled to move people into hotel rooms, thinned out crowded shelters and moved tents into designated spots at sanctioned outdoor camps.

While shelters saw some large COVID-19 outbreaks, the virus so far doesn't appear to have brought devastation to the homeless population as many feared. However, researchers and advocates say much is unknown about how the pandemic is affecting the estimated half-million people without housing in the U.S.

In a country that's surpassed 5 million identified cases and 169,000 deaths, researchers don't know why there appear to be so few outbreaks among the homeless.

“I am shocked, I guess I can say, because it’s a very vulnerable population. I don’t know what we're going to see in an aftermath,” said Dr. Deborah Borne, who oversees health policy for COVID-19 homeless response at San Francisco's public health department. “That’s why it’s called a novel virus, because we don’t know."

More than 200 of an estimated 8,000 homeless people in San Francisco have tested positive for the virus, and half came from an outbreak at a homeless shelter in April. One homeless person is among the city's 69 deaths.

It's slightly higher in Maricopa County, which includes Phoenix, where nearly 500 of an estimated 7,400 homeless people have tested positive, including nine who died.

Health experts say the numbers don't indicate how widespread the disease is or how it might play out long term. It's unknown how many people have died of conditions indirectly related to the virus. While the coronavirus may dissipate more easily outdoors than indoors, living outside has its own risks.

The official causes are pending, but Zevin notes that fentanyl overdoses are rising and stay-at-home orders may prevent people from getting help quickly. He knew isolation could result in more overdoses.

“I think that’s happened, and whether it’s more or less than I would have expected, I don’t know," he said. “It’s frustrating to be able to forecast something as a problem, do everything you can to prevent it as a problem, but it's absolutely a case of competing priorities."

Good data is difficult to get on the homeless population because hospitals and death certificates don't track housing status, says Dr. Margot Kushel, director of the Center for Vulnerable Populations at the University of California, San Francisco.

She was hesitant to draw conclusions about how the pandemic has affected homeless people overall but said “this may be an example where being outside and unsheltered, just in terms of COVID, maybe let people be at lower risk. But again, part of that is that we just don’t really know.”

New York City has reported more than 1,400 infections and 104 deaths among homeless residents out of more than 226,000 positive cases and 19,000 deaths. Roughly 60,000 people live in shelters, unlike in West Coast cities where many more are unsheltered.

But because New York's shelters have more children than the general population, when deaths are adjusted for age, the mortality rate for homeless people is 67% higher than for the overall population, said Giselle Routhier, policy director for the Coalition for the Homeless.

“That’s extraordinarily high, in our opinion,” she said.

“We have a team of firefighters that walk the floors to put the cots back where they’re supposed to be,” said fire Deputy Chief Chris Heiser, who is incident commander for the shelter.

He estimates about 3,000 people have come through. And of more than 6,000 COVID-19 tests administered, 18 so far have been positive. San Diego County has reported more than 200 positive cases and no deaths among its nearly 8,000 homeless people.

Richard Scott, who is in his mid-50s, moved to the convention center about three months ago after his roommate, who is medically fragile, told him that he could either stay home and not work or leave. Since then, Scott has slept on a cot alongside about 500 men in a cavernous room with high ceilings and a big floor.

Sometimes there's a theft or disruptive person, but overall Scott calls it a safe place to stay.

“We wash our hands 20 times a day — well some of us — and we get our temperatures checked every day, and they’ve been real strict about that, too,” Scott said. “I’m so happy being here; it’s a blessing.”

Virginia McShane, 63, sleeps in a separate part of the center. She arrived in April after she could no longer afford a $25-a-night hostel.

“We’ve got a back entrance and a front entrance, and that keeps the air circulating pretty good, so I think that’s why all of us haven’t come down with the coronavirus," she said.

The rates at which homeless people have tested positive for COVID-19 are all over the place, says Barbara DiPietro, senior policy director for the National Health Care for the Homeless Council, which is working with the Centers for Disease Control and Prevention to study the issue.

Surveillance testing of more than 10,000 people at shelters and encampments nationwide has resulted in a rate just over 8%. But DiPietro says over 200 testing events of homeless residents in five cities showed rates ranging from 0 to 66%.

“So this is a wildly variant, moving target depending on who and how and when you test," she said.